On whining and babies

Believe it or not, "whining" and "babies" are two entirely separate subject matters for this post. I struggled trying to decide which part to write about first. But, since it's a running blog, I'll give you running (whining) first.

On Running/Whining
This is the last post I'm going to write about Cleveland. I just need, psychologically, to wrap it all up and move on. I know that all runners bonk eventually. And I get that it was my day to bonk. I guess I've had races that were slower than planned before, but I'd always known why (I was postpartum, it was raining like cats + dogs, etc). But total bonkage was new to me, and it was crushing, both physically and emotionally. Thank you all SO much for your kind words of support and inspiration. I'd really wanted to go sub-4:10, then try for a sub-4 on the next training cycle. But, that clearly didn't happen. I still want to go sub-4 eventually, but it may take one more marathon than I'd originally intended. I keep having to remind myself, I bonked, but I improved, and by 11:20, which ain't little. Before I leave this topic, and promise to stop whining about Cleveland, I want commit to writing my biggest lessons learned.


And with that, I'm going to move on from it. I really cannot thank you guys enough, again, for all the encouragement, thank you, thank you, thank you. Runners are the best.
On Babies
Today has been a pretty awesome day--a day all about my little boy. Today was a little more emotional than I expected. See, three years ago yesterday I looked like this: 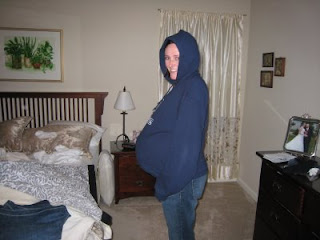 And three years ago this evening, my beautiful, amazing little boy was born. He doesn't look anything like this anymore. He's blond, and sleeps a lot less. He has changed my life in so many ways. 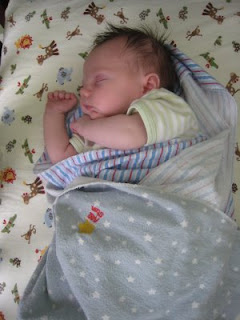 Today we had a party with friends from the neighborhood and work. Little Boy got tons of awesome gifts that have kept him entertained all afternoon. We had all kinds of yummy food, including some cupcakes that I made with my friend from next door. We made Devils Food Cake cupcakes with green, blue, and white with green sprinkles as a buttercream frosting. YUM. 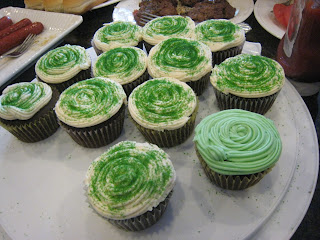 I found myself feeling pretty emotional about his biggest gift, though. We finally removed the toddler bed (which his crib had converted to) and upgraded him to a twin bed, complete, of course, with all new Cars-themed bedding. (if you're not in the know about little boys, Cars and Thomas pretty much rule their world). We also finally replaced his changing table (which hasn't been used in ages) with a child's desk that he can use until he's raised.

Seeing his room without his baby furniture in it was momentous. And seeing his total joy when we asked if he was ready for a big boy room was priceless. My little boy is growing up. Even the baby furniture is gone. I both was and wasn't ready to see his room so differently.

GAH sorry, I am so behind and still haven't read about Cleveland! Sorry that you had a disappointing day (will read details next!) but I think one of those races is inevitable for all of us. I had mine in October... you will bounce back!

Sorry about your disappointment. I truly understand how you feel. No matter how you look at it you did a great job last weekend! Happy birthday to your little one!!

No matter how you feel, in due time, you will look back at your experience in Cleveland....and feel proud because you set a PR. Focus on the positives and by setting a PR, it just means you know you can set a PR next time.
Great job again....and you will soon get your sub 4...

You're little guy is birthday buddies with my niece:)

So glad to hear that E had such a great birthday! A new bed and dresser - what big milestones for you all! And there are many more ahead! Enjoy!

Happy Birthday to your little guy! Im glad your coming to a point where you can have some closure! I look forward to following your next training cycle!