Miles: 73
I'll be up front: I had some challenges this month. I ended up missing my long run twice--once due to illness and once due to weather. I missed some weekday runs due largely to weather. This was life. 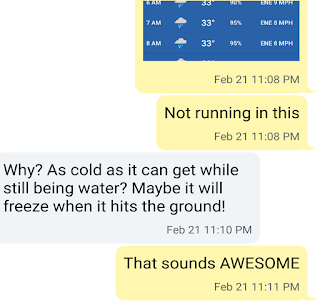 But then sometimes you run in the fluffy beautiful snow and get frost in your eyelashes and everything is right in the world. 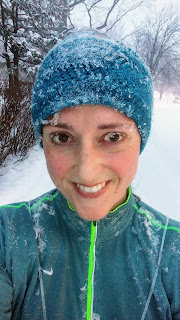 I had two notable runs. The first was on Valentine's Day. A project I'd had under review for two long, agonizing years at work had finally been accepted. When the email came I got up, changed, and went for a run. I ran fast. I ran happy. I ran 5.6 miles at an 8:12 pace, and was trying to go slow at first. I ran mostly negative splits. It was one of those runs that is everything. You fly, and you smile.

Then the next morning, I went running with my neighbor. I told him I needed a shake out run after going so fast the day before. We spent it dodging last bits of ice and snow, most of which had melted overnight from warmer temperatures and rain.

When we got back to our street and stopped at his house, I looked down at my left ankle, which hurt, and was surprised to see it was bleeding. My sock was so short it didn't protect my foot from the top of my shoe, which isn't usually a problem. It hurt to walk. "Should I drive you home?" my neighbor kindly offered. It's about a tenth of a mile. No, I said, I'd just take the shoe off. But then it was weird to walk in one shoe. So that's how I came to walk barefoot in Cleveland in February.

I also attended a Yin class with my friend Candice at the end of the month. I'd never heard of it, Yin. In the first 5 minutes I thought, "well, at least it's only an hour I'm wasting." But by the end I was ready to sign up to go back.

The good: Such.Deep.Stretching.
The bad: I'm just not that into my chakras.

So yinning, what is it? It's holding a pose for 1-4 minutes. You won't sweat, or feel frustrated. You will leave feeling amazing. Try it. If you hate it, it was only an hour.
Posted by Joanna at 8:21 PM No comments: