The Story of Our Utah Home

Warning: this post is not about running. It's about another of my loves: telling the stories of old buildings. This one, our home in Utah, is particularly dear to me. We poured our blood, sweat, and tears into it. I am so proud to be part of the history of this home. And so, having left the home and Utah behind, to be but one chapter in our lives, I delight in bringing you its story.

The house is an urban legend in the neighborhood. Its legend status means we've heard a lot about it from neighbors, but there's a lot of what I'm about to say that I cannot possibly verify. But I'm going to tell you all of it.

Here's what I know. Our house was built in 1909 by a Dr. Steele and his family. It's a Tudor with Craftsman influences, and was among the first homes in our neighborhood. It sits on a triple, corner lot and has fruit trees, some of which are very old. There is a house about 2 blocks away that was built from the same plans at about the same time. 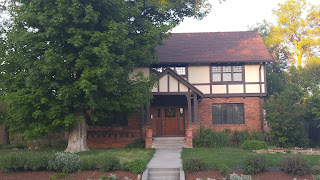 What follows is what we've been told. Some of it is probably true.

From at least 1980 through the late 90s, and for I don't know how long before, a couple lived here. They had a daughter who was at least a few years older than me, maybe as much as 15 years older. They liked privacy, and kept so many trees that the house was hardly visible from the street. They had a lot of pets, including cats and at least one parrot, and we've heard rumors of other pets.

The mother, who I'm told was a large woman, took to living upstairs in the home and either couldn't or wouldn't leave. The family had financial problems, and sold many of the original features of the home, including the original wood floors on the second floor, a built-in seating area, window frames (with historic moldings) and even the stairs and railing. It's unclear whether there was a second staircase or whether they used a ladder in place of the original stairs to get between floors. They also sold a second home that was on the property in 1980--this I know for sure. It's a sweet little brick home that's perhaps 10 years newer, and is now a separate parcel to the east of ours. I don't know why it was built originally, as part of the doctor's medical practice, a sister-wife situation (which was common in our neighborhood then), or a rental unit.

Toward the end of the 1990s, the wife had to be removed from the home. Some people have told me this was done by crane, others have said they don't know but that a crane seems likely given her size and the lack of proper stairs. After this, the daughter had the father placed in an assisted living facility and she and her boyfriend occupied the home. The home was foreclosed on.

As several people have told me, it sat vacant for some time after the foreclosure, with everything you'd expect to go along with vacancy: broken windows, disrepair, and according to one neighbor "dead people screaming" (?!?). According to one source, the home was on a list of potential demolitions by the City.

Perhaps saving it from demolition, a developer purchased it in about 2000. He made the home habitable again, but strange. There was still no railing, maybe no stairs, and some other oddities remained. My favorite was the very small kitchen sink in the second upstairs bathroom. 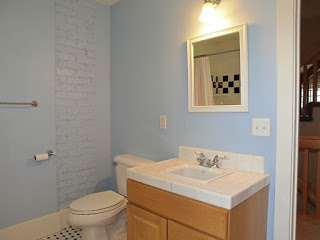 Other changes were made to the home at various times, maybe by this developer, maybe by other people. For instance, at some point there was an octopus heater. I'd never heard of this either. If you Google Image search you'll get results showing huge metal installations. What you don't see are the shallow well-like parts of these, the remains of which were still in the basement when we moved in (we've since had it filled in). We could also tell that someone had moved the living room wall to create the dining room, where there had once been a larger living room and a hallway from the side entrance. Upstairs, though, was anyone's guess. I couldn't begin to imagine what it had originally looked like. We're also pretty sure our mud room isn't original, but no one can really tell which part was added.

Another oddity is that when the stairs were replaced, someone also built a play room/loft in the attic space over half of the upstairs. We think to accommodate the stairs leading to it, they moved the stairs from the first to the second floor to the left a few feet. While this is sort of remarkable in its own right, its other consequence is more so: moving the stairs and adding a coat closet beside them meant that there was then no interior access to the basement--only exterior access.

In 2001 or so a family bought the home. They lived here for 12 years (or so) and raised their two kids here. They are lovely people--I've met them several times. They did a lot to make the home more functional, like replacing the windows, installing a back deck with the faux wood surface for durability, etc. They are also big into gardening, and we suspect are responsible for some of the newer features of the yard, including the chicken coop that has a stained glass window. We had never canned anything in our lives when we moved in, and honestly didn't know the yard produced food until we got here. We came to love having apples, pears, grapes, blackberries, raspberries, strawberries, hops, and more.

When we bought the home in 2013, we set to work on updating a large portion of the upstairs. We spent several months gutting two bathrooms and turning them into two newer bathrooms, a linen closet, a separate laundry room, and turning a conveniently square hallway into an office. There was a lot of this:

We also freshened up the downstairs with new paint and light fixtures. My mom and I made draperies for the downstairs rooms, because this was the before picture:
And this was a piece of fabric I fell in love with:

We made it ours. I learned a lot in the process, about which I long ago drafted a blog post which was delayed for rather complicated reasons I won't get into, but which will appear at some point. But mostly I learned that it's kind of like fashion: there are some rules you really should stick to, and you really do need to measure, but many rules can be broken by creativity and by learning about all kinds of finishes, systems, and solutions you never knew existed. Make a house what makes you happy, but experiment a lot with visual and online tools before you commit to expensive or labor-intensive choices.

Truth be told, I loved this house. I'm honored to have been part of restoring it to the proud home it once was. But it's time for us to move along, and love our new place too.
Posted by Joanna at 1:05 PM 1 comment: