Addendum on previous post: Elliot is also now crawling! It's not the traditional crawl, but rather something between an army crawl and a traditional crawl. He can cover a good bit of ground pretty quickly these days. Today I saw that I need to take the stereo out of his room, or at least put it on a dresser, as the shiny silver of it attracts him, then the cords overtake his curiosity. He also loves my ladybug slippers (who wouldn't?), the handles on his dresser, and his Jumperoo. I think crawling over to the Jumperoo is his way of telling me that he wants to play. I am loving watching him explore his little world!

I started to make this a post about 2008, but realized that I have a lot to say and that most of it that I want to share is already on this blog elsewhere. I might take up my long lost New Years tradition of curling up with a journal and committing it all to paper. I miss writing, both personal sorts of things and short stories.
Posted by Joanna at 1:31 PM No comments:

I should REALLY be getting the house ready for Christmas, but talking about Elliot is so much more fun.

1. First up is my new favorite video. It needs no introduction.

2. Elliot has a tooth! One of the two center lower teeth has broken through. It's still very short, but it's there! I'm surprised how sharp it feels. He hasn't been too upset about it, but I know that may change as other teeth follow.

3. The Munchkin bottle brush is great. I just heard about it a few weeks ago when a guy behind me in line at the grocery store was buying one. If you have a baby and you don't own a bottle brush yet, go buy one. It was $4 or so well spent.

4. We finally put up our Christmas tree today. Elliot has enjoyed looking at the lights and attempting to grab at the tree skirt. Today he opened his first, and a very special, Christmas present. His Godparents have helped us to start a tradition of reading the nativity story each Christmas, and of assembling a nativity set for Elliot. Here are two pictures of the event. We also have a video of it (which is adorable), but we took it sideways somehow and haven't figured out how to rotate it just yet. 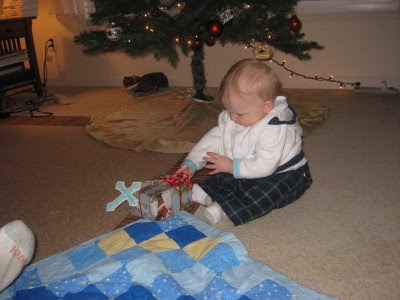 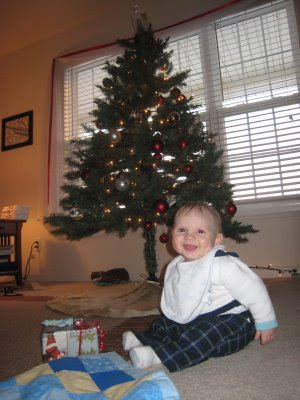 I've been thinking about my life a lot recently. Eventually I want to put some of it on here, but it's too much for one blog post and I'm not sure what of it I'm ready to share. I'm ready to share one part though, which is partly an update on me.

As many of you know, I had been frantically searching for a job since just before Thanksgiving, when I found out that my assistantship funding had run out. It was upsetting not only because it meant I was out of a job, but also because it was a job that I loved. I applied to three positions (and looked at hundreds online). When I showed up to the interview for the first it was abundantly obvious that they'd already chosen someone else. For the second one, I got the notice on a Monday and submitted my materials that Wednesday only to discover that it had already been filled. The third position was posted this past weekend (I think). I applied for it as soon as I saw it, interviewed on Tuesday and was offered the position. I'm really excited about it! It's work that I love doing, with what seems like a great group of researchers.
It was a God moment for me. While telling my husband about the interview and the job, I told him that I was ashamed about how worried I had been. Most of a decade ago one of my best friends shared this with me. 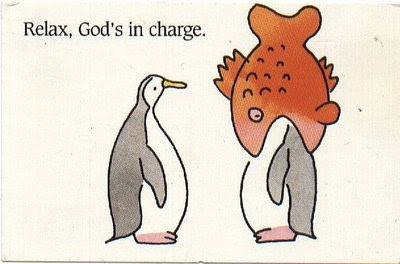 Some years later I heard the expression that fear is the faith that something won't work out. This picture and that phrase have stuck with me for a long time. I've used them both in times where things were uncertain. So when my job situation was resolved, I realized, with shame, that I hadn't held fast to this image. I'd been afraid. I'd had faith that something wouldn't work out.
Maybe it's not that simple. Maybe God uses anxiety as a motivator, to push me to look hard for and strive for something. But I doubt it.

All of this is tied closely to an internal debate that I have, and that I know for a fact some of you have. It's a hard one that I feel like I'm always looking for an answer to. It goes like this: I'm a girl who loves to struggle. I love facing a hard task. I love compelling myself to try something that I only suspect I can do. I'm convinced that God made me this way. Because I'm both a nerd and an overachiever, I'm a PhD student. As my good friends MT, NS, DP, and others will tell you, it's a hard road. There are times when every good graduate student questions how much they want the degree, and how much they are willing to sacrifice to get it. During the hardest points in the program, I wonder whether a) God is trying to test my devotion to the path He laid out for me, b) God is telling me that I belong elsewhere, or c) whether I'm trying to use God as an out. I'm still here and plan to stay here, apparently because I believe that A is the correct answer. And, despite whatever road blocks and frustrations I encounter, I do absolutely LOVE my work. Regardless, when it comes to navigating the everyday, it's just hard to figure out what God is saying when you have your head in a fish.
Posted by Joanna at 8:50 PM 2 comments:

some things have changed

A lot has passed in the few weeks since my last blog post. Let me update you first on running.

The following weekend I was scheduled for 14 miles. When I got up to feed the baby at 6 on Saturday morning, the weather looked bleak. I decided there was no way I was going to run 14 miles that morning. I would rather do it the following day, when the weather promised to be better, even if it meant running it alone. Later in the day I discovered that my coach had made the same call, rescheduling practice for Sunday morning. So Sunday came and I rolled out of bed, into my winter running gear, and headed to the park, only to find that.....I was the only one there besides our coach! She patiently waited over 2 hours for me to finish the 14 miles. I was proud of myself for doing it, both because of the distance and the weather.

Then I went home and wrote an email to the Team coordinator and told her that I found out that I don't have funding for the spring (I'm working on this), and in conjunction with some other personal reasons, I needed to withdraw from the Disney Marathon. Realizing that it was not feasible for me was heartbreaking. It was also the best thing for my family. The coordinator was completely understanding. For those of you who have donated to my race, I will be emailing you about this. Rest assured that the money you have donated will not only still go toward a great cause, but will also still be supporting my quest to complete a marathon. I am planning to run the Chicago Marathon with the Team next October. It will be glorious.

We spent Thanksgiving in Maryland with our families. Elliot got to spend more time hanging out with his 2-month-old cousin, Nadia (I'll post some pictures when I have access to them), and met some of his Nana's closest friends. I got to see my best friend, and she got to meet Elliot. It was a lovely time.

In other news, Elliot had his 6 month check-up on Wednesday. He weighed 16 lb. 15 oz. and was 26" tall. The doctor said he's a good looking kid, and I have to agree! He seems to be enjoying fruits and vegetables, except peas. Really, who can blame him for refusing pureed peas? He can sit up on his own with no support for long periods of time now, though every here and there he still wobbles just a bit. He has the best smile and laugh I've ever seen or heard. Of course, I'm biased. :)