On Sunday I toed the line at the Rite Aid Half-Marathon. It truly was coming full circle. In 2011 I ran the full. It was the first time I ever visited Cleveland and I had no idea I'd later move here. Seven years later and here we are, back at that same start line. This is one of those times it's hard to wrap my mind around all the places we've lived and the journey through them all.

Sunday morning I was up at 4:45 to make sure I got all the way through the routine before leaving to catch the train to downtown at 5:20. The train was surprisingly full--I think I counted ~50 people, and I couldn't see all the way to the back of the second car. The train newbies clutch their singles as they board, because on the Rapid (our train system), you pay when you board when going east, and when you exit when going west, and this is totally unclear unless someone tells you. There is something vaguely charming about the quirkiness of it--of the assumption that people understand it.

When I exited the train at Tower City (the central hub), it was raining, harder than you'd like if you plan to wait outside at the start line. Instead, I found my way to the bathrooms, because indoor permanent restroom > port-a-potty. Then, as I was about to leave to head toward the start, my Sunday morning crew messaged me to stay put, that they were coming into Tower City and we'd just meet there. We hung around about as long as we dared before heading to the start.

As we snuck through an opening in the corral gate, moments before the start, I saw my friend Robin who was there as a volunteer, because she's awesome like that. 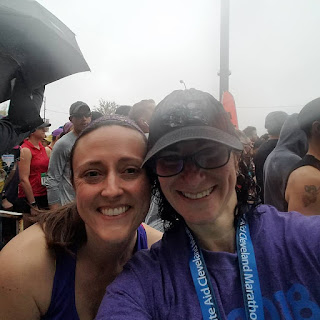 Moments later, Cathy, Tina and I were off and headed over the start line. The course wound through downtown and, other than going over some metal grate bridges, was a pretty flat, smooth course. The most noteworthy part of the early miles was another runner.

There was a woman running with a Cleveland Indians flag. A full flag, on a pole that was several feet long. It said Indians and had a picture of the mascot. I've seen people run with Marine Corps flags, and that I understand. But the Indians?! Curiosity got the better of me. "Did you lose a bet?" I asked her jokingly. She glared at me. "Just a big fan of the Indians? Why the flag?" She replied that they are getting rid of the Chief as the mascot and she is protesting.

I blankly stared for a moment and moved back away from her. Come again? I thought. You're running in the rain with a generic Indians flag to protest?! Cathy and I just looked at each other. I mean, if you're gonna protest maybe just make it clear what you're protesting? So Cathy and I talked about how people get too wrapped up in things sometimes.

I was trying to keep us at about a 8:57-9:00 pace throughout, with a planned slower start and to make it up in the middle somewhere. We got wrapped up in the energy of the start, but got into our groove pretty quickly. Here are the mile splits:
Mile 1: 8:36

In the middle of mile 7 we came around a corner to meet, face-to-face, the course's largest hill. I actually laughed at how unexpected it was, just so all of a suddent. According to my Garmin, even including the last few feet of elevation gain that were really past what looked like the top of the hill, this "monster" was 100 feet in elevation gain. About 70 feet of this came in about a quarter mile. I said out loud, "Can we agree not to complain about this later on Facebook?"

No, no we couldn't. I've been struggling with all the complaining lately. After the Hermes 10 Miler in April, people took to the Hermes page, the MRTT page, and their own timelines to complain about a hill. For Rite Aid, people complained about all sorts of things, including this "monster" hill. It was a quarter mile. If you spend more than 4 minutes complaining about it, you have spent longer complaining than you did running/walking it.

People also complained loudly that they thought the course measured long. I find all the casting of aspersions disrespectful to the race organizers. I think they know how to measure a course. If you think the turn-around was wrong, send them a note to double check the placement. My first sub-2 was in a race where the turn-around was misplaced. They acknowledged it and adjusted our finish times. It happens.

But all the online complaining about things that may or may not be valid, that I find difficult. Guys, MapMyRun is not super accurate! It tends to measure long. Cathy and I ran side-by-side and hers clocked the course at 13.7, while my Garmin measured it at 13.37. Also, the very urban environment is hard for GPS accuracy. I recently ran the Hermes 10 miler in vaguely the same part of town. My Garmin under-measured it by a quarter mile, just due to the hills/buildings/overpasses. All this stuff is legit. And if it isn't, and the course was actually long, they will sort it out.

We lost a few seconds at the turn-around, which was a 180* turn, but otherwise stayed reasonably close to mile-to-mile goal times through the second half, adjusting up and down for water stops and slight elevation changes. I enjoyed the on-course music and crowd, and by the second half the rain had stopped. It was just a cool, foggy morning.
Mile 7: 9:09 (the turn-around)
Mile 8: 8:56

Cathy was going for her first sub-2 half. I've seen her run sub-2 paced 10 milers almost every Sunday for months. Then she goes to races and psyches herself out! Today would be different. I told her I would make sure she crossed in under 2 hours. Over the last few miles she kept asking me, "Are we going to make it?" "Are we still under 2?" ""How much time before 2 hours?" I kept telling her we were fine, even if Garmin error was insane, we were fine! She had this.

We approached a bridge back into downtown. I reminded her how many times she'd trained over the shorter, steeper bridges on the Towpath, all for this moment. She nailed it. There was a slight incline into the block-long straight-away. We attacked it. She had this. We kicked from about half a mile out.

FINISH: 1:58:27.
I couldn't have been happier to see Cathy reach her goal. She was so well trained and ready for this! I loved getting to be part of it. A runner's first sub-2 is such an achievement!

After, we were all a little chilly, so Cathy and I found a merch tent. I bought a "Run the Land" t-shirt (LOVE!!) and she bought a nice race sweatshirt. They screen printed my shirt on the spot, so it was even warm when I put it on.


We tried a couple places for brunch but due to the race route, we found we couldn't get out of downtown headed in the right direction. We ended up eating on the east side, which worked out well to join up with Candice and her daughter.

All told, what a great race experience. I'm just so full of gratitude for it all. 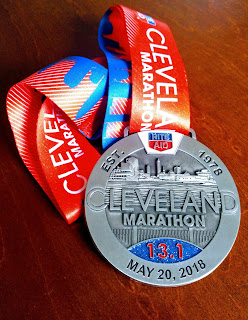 Posted by Joanna at 9:55 AM No comments: