January Review: A Tribute To Yoga

Total Miles: 84.9
Yoga Classes: 5. This might, in all seriousness, be some sort of record for me.
Other: I went skiing one day with my older son. I love those days so much.

Before I get to my Tribute To Yoga, a brief review of running.

Mid-month my friend Candice was finally ready to start re-entry to running, after dealing with an injury. I was happy to meet her one sunny Friday to see how things would go. After a quick 30 minutes we were all smiles. 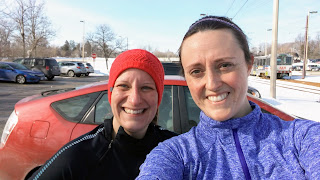 People sometimes ask how I manage to run outside in Cleveland in the winter. How do I deal with the weather?

Sometimes you get lucky and it sleets on your rest day. Often, you suck it up and run on snowy roads or in a snowstorm. When forced to, you get on a treadmill. But sometimes, if you can just wait and go at a different time, either the storm has passed or the roads are cleared. My delightful Sunday run group used this last strategy a few times--just ran later. On this day, I think we started at 4 or 5pm. This is one of my favorite pictures of us. 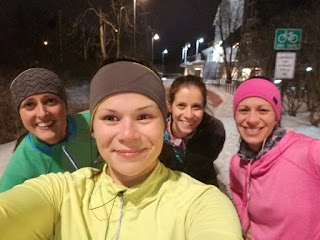 My Tribute To Yoga
In about 2004, I regularly attended a Pilates class for about a year. A few years later, I discovered yoga, mostly through DVDs I found in clearance bins. I don't, frankly, remember the first yoga class I ever attended. What I am certain of is that I saw a sports medicine doc and a sports massage therapist for a knotted left piriformis early in 2011.

I went to a few classes in St. Louis, sometimes with my friend Linda. In Utah, I attended a weekly class at my work for about a year, then an early morning class near my house another year. The class was seldom difficult. I enjoyed the feeling I had when I left. But I can't say I enjoyed yoga. It was something I did to avoid injury. I did it because I felt I had to.

I felt like that until just a few months ago. Back in September, I realized that my knotted piriformis was part of the problem I was having with my knee. I also learned that I'm really tight in places, and that my iliopsoas was really, really angry. Yoga could help.

I also finally learned the expression "set your intention" for your practice. Prior that, I saw yoga as essentially standing still and sweating while frustrated. I finally grasped that I needed to take yoga inward. That was difficult at first for this runner, who loves to go fast and who is decidedly extroverted. But with practice, I got it. Finally.

Then, about 3 weeks ago, in mid-late January, my piriformis finally released. After at least 7 years of living with it in a sometimes-painful knot, it finally released. You might wonder how I did this. The answer isn't glamorous: Weeks of sitting on a golf ball for long stretches, then rolling on a pressure point ball until one day, it let go.

After that, yoga positions that call on hip strength became more realistic, but on my left side, it often feels like there is nothing there to hold me up. Like my body has to learn how to live without the knot now. Like it just stopped trying to build muscle there, because a knot was in the way, or because my body had to compensate for it. But I'm going every week, and I'm slowly seeing improvement.

What's better? I actually look forward to it now.
Posted by Joanna at 4:37 PM No comments: