2017 was our first full year in Ohio. My highest mileage year ever. A year of new PRs for the 5k and 10k distance. My fifth marathon. New friends. So many other things. 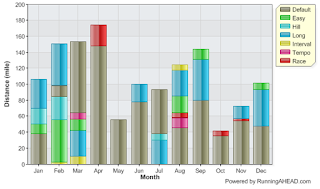 I can  easily pick out some notable events on this graph. For instance, Marathon #5 happened April 30, and some time off in May. Then, one day in September some pain I'd been having came to a head, and I had to drastically cut mileage, even dropping back from the Towpath Half in October to its 10k distance. I spent November and December slowly building back up. On New Years Eve, I finally got back up to 10 miles for my long run.


Bike miles: 15
Really just biking to yoga class and back over the summer.

Yoga classes: 14
I went about twice a month from June onward. I know it's not a lot, but I'm calling this one a win.

The Actual Pictures
Past the numbers, this year was nothing short of incredible. It started out a little rough, as my transition out of Utah and to life here was a bumpy one in some respects. The year ended on such a bright note--logging ten miles in ten degree weather with a group of funny, honest, strong women I got to know along the way. 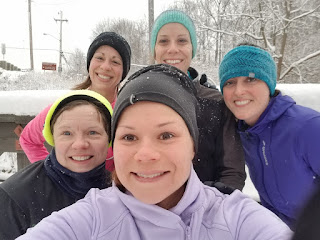 That "along the way" covers so much! It's an odd thing to type, but I feel like I gained a metric shit-ton of wisdom this year. The year brought some preposterously less-than-rosie situations and also some new and renewed friendships that have made my heart so full.

I learned (or re-learned) how crucial it is to always cheer for your people. Even if you disagree with them. Especially when you're competing with them. If you can't support a friend, you take a breath, exit stage left, and reappear when it's blown over.

So, this should apply to everything. EVERYTHING. It's in economics--cooperative competition makes a thriving set of businesses in a region. In running, Shalene Flanagan taught us about applying this to running. I watched the NY Marathon finish like 20 times. I wasn't misty-eyed you were misty-eyed. It was awesome.

In general, runners are great about this life lesson. We're conditioned over thousands of miles to cheer for other runners. In November, I ran a local 5k with friends. I paced my friend Candice for the first two miles, and then knew she had it and I wasn't any additional help, so I went ahead. When she later realized I won our age group and she won second, she exclaimed, "You bitch!" with the biggest smile and a congratulatory hug. Because the fact that I ran faster only means she chased me. The fact that my friend Katie runs faster than I do only makes me stronger, because for months I chased her on long runs. Your ability does not diminish me, it makes me better. 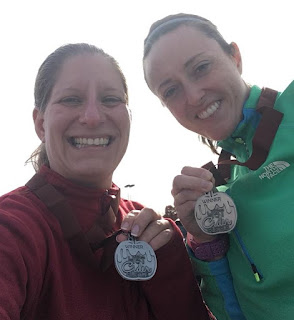 This flip-side of this lesson learned is respecting the voice in your head that alerts you to red flags. That tells you that sometimes, other people make you uncomfortable, and you need to respect that and shift the situation rather than ignore it. This year, I gained the confidence--through some hard-learned lessons--to hear that guiding voice, and to set some limits on what I was willing to accept.

Put yourself out there

Part of the confidence needed to hear that guiding voice is in the willingness to put yourself out there to change your situation, whatever the issue is. Put yourself out there. Try new things. There was so much good waiting for me. I just had to look. Soooo many applications of this this year, but take this picture from early 2017. The hardest part of running in the winter is convincing yourself to just go. Go! And then you go and it's not terrible at all. Look at us. We're laughing. It was cold as $&%^* that day. 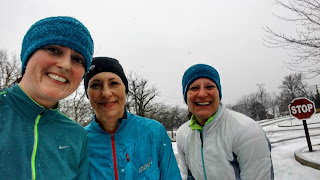 Such a theme of my year. Where I felt overwhelmed by getting to know neighbors in 2016, I embraced it in 2017. When I missed a long run one Saturday this past summer, I joined up with a group I didn't know (through MRTT) on Sunday, and began forming friendships that have come to mean so much with an amazing group of women. And when I had the courage in other situations to say, "hey, these things don't sit right with me," I found support and more doors opening than closing.

About Those PRs
The 5k PR happened by accident, pacing my friend. After that I realized I hadn't run a 5k literally in years. YEARS. So this is a goal for 2018--to race one for real and see what happens.

I PRed the 10k twice this year. First, at the Hofbrauhaus 10k in August. I had a head cold which slowed me down, but I was happy with the results.
Then, one day on a long run, some pain I'd had for months just came to a point where I couldn't keep it at bay any longer. Cathy found me walking back to the start during a long run. "What's this?" she said as she came up to me. I told her I was in pain. This was September. On the last day I could, I dropped my Towpath Half registration to the 10k. I wasn't sure I could even do that without hurting, but I did (you can read about that here). I won my age group and PRed, both of which were a surprise. I turned in a 48:13 that day, and while I'm sure I still have more to give at that distance, I'll take that one. 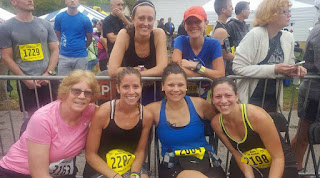 My long run group was in full force that day, a few of us PRing and cheering each other in. My friend Kelly came from WV which made me so happy, and I got to watch her turn in her first sub-2 half.

But then, despite a consistent training cycle, I did NOT PR my spring marathon. Because it was 86* and sunny. But that's the thing about marathons--there is no certainty. I'm not sure I'll re-attempt that one in 2018, but I will go for a half PR for sure.

Looking Ahead
I finished 2017 feeling so hopeful. I have come to love Cleveland, and it has come to be my home. As a family, we have found our people in our neighborhood and elsewhere. Maybe it sounds corny, but my heart is so full ending this year--full of thankfulness for our street and our neighborhood, full of love for this crazy tribe of runner women I've come to be part of, full of appreciation for other aspects of life that have nothing to do with running.