Thank you so, so much for the comments of support and encouragement a few of you have offered to me in various forums since my post last week. I appreciate that so much.

It's a week later, and I'm concluding Week 2 of Project: Fix Joanna. I am delighted to report solid, actual progress.

Progress Point #1: I Ran Without Pain

After posting last week, I headed out for Trial Run #1, a short out and back from my house. The run went fine, but that wasn't newsworthy; I hadn't had much pain while actively running during the whole ordeal. But, what did matter, and this is big, guys: I didn't have pain at any point following the run. This is the first time in about 9 months that I could honestly say this. Hallelujah! I repeated the run on Thursday morning, and again had no leg pain.

How? Well, I do think last week's sports massage helped a ton. But before and after these short runs, I stretched and tennis-ball-rolled the problem areas in my legs. I also took NSAIDs after both runs. Then tennis-ball and foam rolled again later that day. And the next day, just in case. I'll tennis ball & foam roll fourteen times a day if that's what it takes!

For about half of 2015 I was decent about going to Tuesday morning yoga. The class is great--a lot of stretching, some strengthening. You leave feeling dewy and awesome about the world. I love the class. But then I'd watch those Runner's World cross-training videos that focus on core strength and look super fun and a little intimidating, and I knew I wasn't doing enough. I'd heard of another class that was created by a runner who was sick of being injured. I thought, "hey, that sounds like me!" I was a little intimidated (the description included the word "very"). Nothing ventured, nothing gained, right? Off I went.

I left feeling like Runner's World would approve this as honest to goodness cross-training. The kind that actually prevents you from hurting yourself because it's focused on stretching, opening, and strengthening exactly the areas that athletes need to attend to.

Feeling a little bold from these successes, today I headed out for a slightly longer (3.5 miles), slightly faster (8:54/mile) run. It felt great. I'd planned to run slower and longer, but it's so damn fun to go fast, and dammit I miss it!! I've got my fingers thoroughly crossed to see how things feel tomorrow.

I refuse to see this lingering injury as a set back. I am taking this as a step toward long-term strength, by teaching me to identify, treat, and bounce back from a fuller range of issues, and finally teaching me once and for all that I need to actually focus on strength training. Here goes, Project: Fix Joanna, Week 3.
Posted by Joanna at 6:20 PM 1 comment:

Hi! Remember me? I used to run. Then, I used to write blog posts about it. Then, something horrible happened and I stopped doing both of those things. And I've been AWOL since July. But yes, yes readers, I am still alive. Given that it's the new year and whatnot, I decided you are long overdue for an explanation about all of this not running business, and a summary of last year.

No, my friends, I have been injured. Back in early summer I wrote about how I was having to stop multiple times during short runs, and how I was afraid I might DNF the Utah Valley Half Marathon (and then gloriously didn't--read that story here). After that race, I continued running through the summer but didn't register for more races because I had no idea when I would be able to do distance again. I kept doing Thursday morning runs with my neighbor, because I adore her and then, because she was moving back to St. Louis and I wanted to spend all the time with her I could before that day came. I even registered for a mid-day running class at work, and managed to go a few times. I LOVED the class. We did speed work and short (less than 5 mile) trail runs and easy runs and I met other runners.

But it hurt. A lot. It got so I couldn't bend my left knee very far, and so that even walking short distances left the backs of my lower legs throbbing. Then one night I got out of bed and looked up symptoms of a pulmonary embolism on the internet because I thought I might be dying. So finally, in mid-October, I did the extreme. I benched myself.

So what was going on? How could I fix it? I'm not sure I have answers to any of those questions, but here's my best guess.

What Was Going On?
Back in late March I realized that I'd inadvertently forgotten to replace my running shoes for significantly longer than usual. Typically, things start hurting around 350 miles on a pair of shoes, and these were at at least 450 if not over 500 miles, and things hurt. My feet hurt. My hips hurt. My knees hurt. When I went to replace them, I inquired about changing the make & model. I'd been running in Brooks Adrenalins since 2007, size 102A (narrow--I swear this detail is important in a minute). This had worked well until August 2014, when I hit 200 miles in a month. And then, narrow was too narrow, and I realized quickly that some foot problems I'd chalked up to work shoes previously were just mild versions of the high mileage shoe problems. The bottom line: my heel is narrow, but my toe box isn't, and the narrow shoes were rubbing the ball of my foot at high mileage.

So, I tried new shoes. First, a pair of Mizunos that lasted 2 runs and clearly weren't working. Then, Brooks Ravennas. They fit just fine, but taught me that I do not want a really cushiony shoe.

How Could I Fix It?
I still don't really know. I've been a runner since I was 15. I know how to handle IT band problems, piriformis issues, shin splints, low iron, and a range of other problems. This, no clue. I tried stretching, foam rolling, and rest. Nothing. When 9 weeks of rest didn't help (but nearly drove me insane), I finally saw a sports massage therapist earlier this week. I haven't run since, so I know not to celebrate yet, but I'm pain free, finally, and cautiously optimistic. I've walked several miles this week without problems, at least. I'll take it! The run test is coming very soon. Maybe before you've even read this.

And finally, what did all of this mean for my Year in Running 2015? Drum roll, please.

Mileage
It meant overall, lower mileage than I'd hoped. My count is imperfect because I had to switch how I was tracking at some point, but a low-end estimate is 631 miles, which is my lowest in several years. The miles looked about like this: 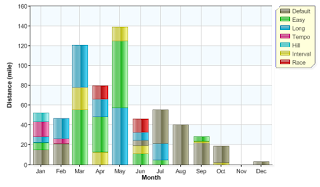 Races
I ran two races in 2015, the Salt Lake Half and the Utah Valley Half. I set a course record at Salt Lake and a 13.1 PR at Utah Valley. I call that a successful year!

Cross Training
Through the summer, I was pretty good about going to yoga once a week. It helps SO MUCH. This year taught me the importance of cross training in a big way. This will be an increased focus moving forward.

Other Lovely Things
My year included some really lovely non-running things, too. In June, Mr. Joanna and I celebrated our 10th wedding anniversary with a kid-free trip to San Francisco. We'd always wanted to go, and it was everything we'd hoped for. 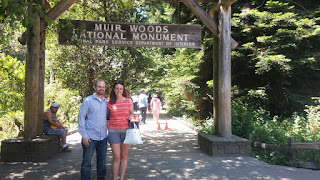 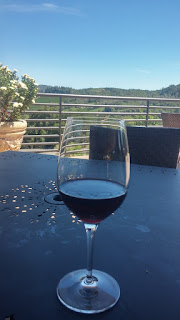 In August I got to go to West Virginia (below), and in November I had the honor of helping my Illinois Running Buddy and dear friend, the ever lovely Meg, get married to her love. Of course, there were many other great things from our year, but you've just finished reading all the family newsletter Christmas cards, so I'll spare you. :) 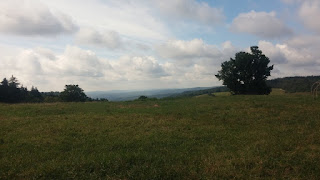 Looking Forward
Looking to 2016, my first priorities are easy:


There you have it. That's where I've been. If anyone has other suggestions about my lower legs, I'm all ears! I'm so eager to get back out there, and see 2016 off to a strong start.
Posted by Joanna at 1:09 AM 1 comment: