After a successful March of meeting goals and kicking ass, I set a slightly higher April goal, and off I went. So how'd it turn out? Welcome to the April Recap.

April Goal: After successfully running my 12 mile/week goal in March, I modestly increased my goal to 15 miles per week.

April Miles: 60.7. Sixty! I'm delighted. This is basically on target, and for three weeks I surpassed my target. Actually, and this blows my mind, I ran more miles in the last week of April than in any other single week since the week ending August 3, 2015. August.

With a goal of 15 miles/week, I should have hit about 65 miles. However, we went house hunting in Ohio the week of April 3 and, confession: I did not run at all. I took running clothes, and was bummed that it didn't happen. My excuses were plentiful. First, we were staying downtown, which was really lovely, but not super conducive to running. Second, the weather was bullshit. Yeah, yeah. I know.

May Goal: I think I'm ready to aim for 20 miles a week, but I am planning a cut-back week this week. I'm setting the May goal at 75 miles. 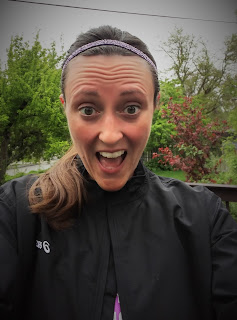 Since I was feeling amazing after a legit tempo run, I decided to go for a full 8 miles on Saturday. The distance felt easier from an endurance perspective than had a slightly shorter long run the previous week, but I do need to step back slightly this week before ramping up again.

Other Lovely Things in Life: Just, all the words. All of them. I'm not even sure where to start.

On the moving front, things are moving forward full steam. My wonderful parents sold their place here, their household goods shipped last week, and they close on their place in Ohio in about a week. Our place is under contract and we are working through the check list (fingers crossed it goes smoothly!). We have an accepted offer on a place in Ohio which we bought via FaceTime (Who does that?!? Apparently we do. And only me. Mr. Joanna has only seen the listing pictures. No, really. This is a frequent topic of discussion in our house.) and have our moving truck and loading crews scheduled. It's all happening! It's all kind of still surreal, to be honest, but it's happening. There will be a whole post (or three) devoted to this. While it's surreal to me, I'm welcoming the whole circus of a journey with open arms.

And my birthday. I felt so loved, so full of blessings and life and a new sense of wonder about the year ahead of me. And my little boy's birthday, earlier in the month. He's so ornery, so mischievous, so cherished.

May is our last month in Utah before our return migration to the eastern time zone. It's going to be crazy, box-filled, and a blur of motion. Stay tuned!
Posted by Joanna at 11:42 PM 1 comment: