Good gear really does make all the difference in the world. I have always hated running in the cold, and in previous years have just simply not done it. I ran three times this week with my new thermal tights--and it was cold all three days--and I thoroughly enjoyed it. Best of all, today there was snow covering our running path. It was the first time I've ever run in the snow, and it was beautiful.
I ran the shortest distance of anyone (6 miles), and consequently was the first back to the parking lot this morning. As I walked across the edge of the lot back to our water/Powerade station, I saw someone that looked strangely like my teammate, Ann, who lives in Arizona through the winter. I squinted. I stared. Finally, reasonably convinced that it was her, I waved. She waved back, squinting to see who she was waving at. She walked over and we chatted for a minute. I told her I had just finished and was going to wait in my car for the others. No sooner were the words out of my mouth did I realize that no, I wouldn't be waiting in my car, because Coach Mike had my keys (he safely stores all our keys, which I'm grateful for!), and he was on the other side of the park. Crap. She gave me her keys (which she had because she had only just arrived) and so I waited in her gorgeous Mercedes-Benz until Mike came back.
As soon as he came back I got my keys and got into my car to get my extra jacket. As soon as I opened the car door I heard my phone ringing. It was Brendan, calling to see if there were breakfast plans. I told him I'd call him back when I knew. As people started returning from their runs and plans were made, I left to go home to pick up my boys and asked that someone call to tell me where we were meeting. A while later I got a text from Mike that said, "Paneras. Leaving [the park] now." The boys and I packed up and headed over there. Everyone arrived at Panera around the same time. Except Mike. Where was he? Atlanta Bread Company. On the other end of town. I'm laughing, but we missed him. We've all been there.
Mileage:
447.8 + 2.85 + 3.3 + 6.0 = 460.0
Posted by Joanna at 7:52 PM 1 comment:

I realize that I haven't updated my mileage in quite some time. The truth is, a cold front moved in around the first of the month and I was just ill-prepared for running outdoors in the cold. In previous years I've decreased mileage drastically in the winter and have stayed indoors. After my treadmill workout the other day, I have dreaded the idea of running indoors. So, with the cold, I just more or less stopped running after the first. I felt like a caged animal after a week. The answer? Thermal running tights.
HOW HAVE I LIVED WITHOUT THESE?? I bought Pearl Izumi Aurora Thermal Tights. They are fabulous. They look like standard black tights, but they are lined with technical fleece. They made their maiden voyage this Saturday morning, when it was so cold my teeth hurt. Was I cold? Not even a little bit. I have no idea why I didn't buy these years ago. As long as the roads are passable, I think I'll be out running this winter! So, the long overdue mileage update:
431.1 + 3.7 + 6.0 + 2.0 + 5.0 = 447.8
Posted by Joanna at 10:23 PM No comments:

Pictures to go with the Elliot update

My friend CH asked for photos to accompany the last blog update. Pictures really do enhance blog posts, so, I shall oblige! First up is a picture of Elliot playing his game outside the half-bath door. Brendan is in there, ready for the jar lid to come under the door. I love it! I'll miss this when he outgrows it. 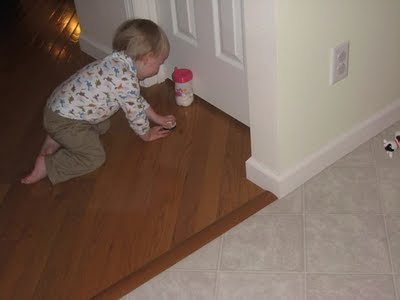 I realized after writing the last post that I'd overlooked Elliot's funniest quirk: OCD-esque obsessions. Here are pictures of a few of my favorites. I love these! First, Elliot's beloved seed packets, which I think I've mentioned before. He loves playing with these, but sort of panics if he thinks he doesn't have a chance to put them away when he's finished. They belong in the drawer. Period. 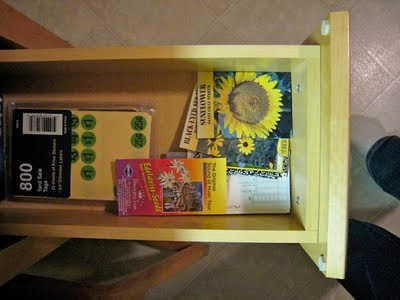 And flashlights must be stored upright. He will take them out of their drawer and do this if they are stored horizontally. 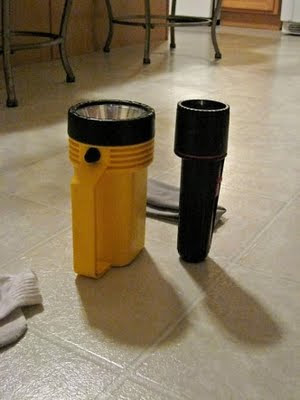 He also strongly prefers that his cup be in a cupholder if possible, which might be my favorite of these traits. I hope it translates into coaster use later in life. 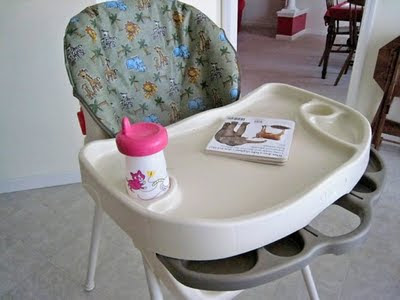 And finally, canisters must also be stored upright, and stacked on on top of another. If they are stored in multiple stacks, he will take them all out and stack them together on the floor, or try to restack them without taking them out of the cabinet. 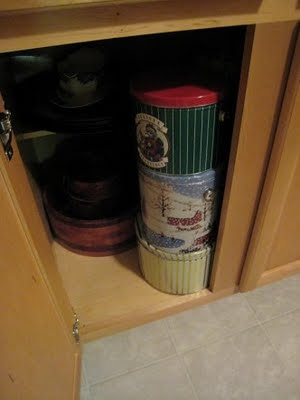 Elliot has had an exciting advancement that's prompted me to write a short update on his little life. Re-reading my last "Elliot update" from August, I decided to do another enumerated list of all things E. He's such a great little boy, and I have no modesty about him.
1. He has gotten over his hatred of grass and will now willingly walk on it.
2. We still get lectured in unintelligible baby garble, BUT, he now has some words! His vocabulary includes: no, up, hot, row, boat, uh-oh, momma, dadda, hi, bye, baby. "Row" and "boat" of course go together, complete with arm gestures that go with the song. Other words have appeared a time or two, but not consistently. The ones that come to mind first are Thomas and twinkle, oh, and Hannah, the name of one of his caretakers at daycare.
3. He has changed from playing with the food storage lids to playing with the colander. He puts it on his head and walks/runs around. Sometimes he puts his blocks or other toys in it. If he's awake, it's probably on our kitchen floor. Some days I just give up on putting it away.
4. He still cannot bear the thought of someone being in the half-bath without him. However, his anxiety has evolved into game playing. We keep two odd items on hand: the lid to a baby food jar, and a business card-sized info card from Verizon Wireless. He slides these under the door and waits for the person on the other side to slide it back his way. So those random items on the floor in our half-bath? Yeah, not trash.
5. He has gotten good at stacking his blocks. He can stack them five high now!
6. He LOVES his daycare. He almost always resists going home at the end of the day, and he often wants to go on weekends. We feel so blessed to have found a daycare that is so nurturing of him, and that he likes so much.
7. I have a brush that I don't use any more. He loves brushing his hair with it.
8. He also LOVES brushing his own teeth (often with some assistance) and feeding himself with a fork. We often spear the food for him then let him pick up the fork and feed himself. It's so fun to watch him gaining independence and confidence.
Posted by Joanna at 8:10 PM 3 comments: