2011 was good to me. I got some shiny new PRs, some Rave Runs, and many other highlights. Welcome to the Year in Review!


Shiny New PRs
This was the year of the PR for me!


PR #1: Martian Half-Marathon, 1:55:56, Dearborn, MI
I had SUCH a good time doing this race (read it here). Actually, the whole darn weekend was great. The kiddo and I flew to Detroit to hang out with ODP, Kdot and my nieces, and sneak in this little 13.1. It was borderline cold for spectators, but perfect race weather. The course is pretty flat, with just a few rolling hills. Aside from a snafu in placing the turn-around point, the race was well-organized and went off without a hitch. Plus, I got to meet a bunch of the bloggers I've been following for a while. 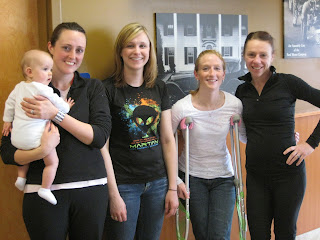 PR #2: March of Dimes 5k, 24:13
I entered this race on a whim and had a blast, but I KNOW I can totally smash this PR. It was windy as all get out and was a fairly hilly course (read it here). Plus, I was hardcore in marathon training mode, so not focused at all on running shorter distances. But, I'm glad I did it, and I won an award and everything!

PR #3: Cleveland Marathon, 4:16:07
If you've been reading my blog for long, you know this race (read it here) absorbed a huge part of my brain for much of the year, for reasons good and bad. I trained harder than I ever had, I PRed by over 11 minutes, and I met more awesome bloggers, but I made some key strategic fueling mistakes that cost me. Live and learn! I'll be back with a vengeance post-baby on this PR! 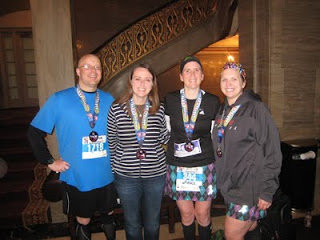 PR #4: Mileage
Ok, so not a PR in the traditional sense, but a PR nonetheless. As of today, I'm at 830.4 miles for 2011, or 100 miles more than last year. I'm especially proud of this because I spent just about half of the year pregnant. Woot!

Rave Runs
This year I also ran in some of the most gorgeous places ever--Southwest Virginia, multiple places in West Virginia, Salt Lake City, and Miami. The image that has stuck with me is, naturally, of the place that has meant the most in my life, Spruce Knob. 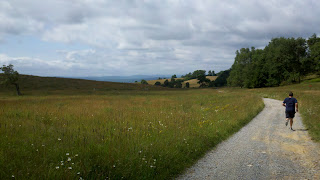 My craziest run of the year was certainly at Snowshoe though, where I accidentally ran waaaaay the heck down the mountain and ended up at the bottom of the ski lift. People were looking at me like I was absolutely crazy as I slowly ran my way back up.

Products Discovered
The longer I spend loving my life as a runner, the more fabulous running gear I discover. (Sidebar--I've been running for 15 years!! How the crap did that happen?!?) Things I've fallen in love with this year: 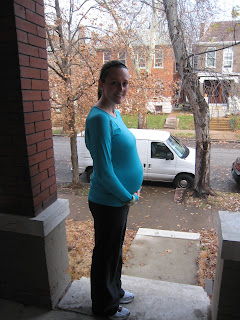 Other Highlights (in no particular order) 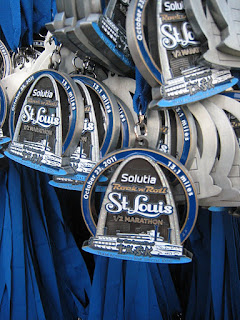 Merry Christmas and Happy Holidays! It's hard to believe I've been away from work for almost a week now, because this past week has been a crazy, happy blur. My parents arrived last Wednesday and we quickly set to work on moving my office out of the baby's room and making the room into a nursery, and of course, all the preparations for Christmas!

Project Make-A-Nursery went very well, and while it's not finished, we are well on our way. My parents and husband painted the room a pale yellow, and a few days later my Mom and I spent about 5.5 hours shopping to find fabric, a rug, bins to hold adorable newborn clothes, etc. It was so much fun to browse through the stores and imagine the room coming together. I will definitely post a picture once it's done. And the Christmas prep, well, there was LOTS of baking, and we all know that makes me happy. 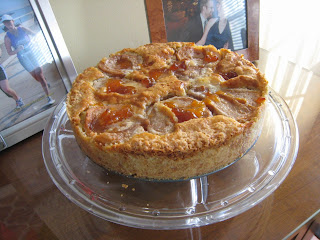 Christmas Day itself was a crazy ~60 degrees. This is me after my run on Christmas Day. Sleeveless with arm sleeves, and it was glorious. The shirt is the second maternity running top I got from Runningskirts. It's a little big, but does a great job! 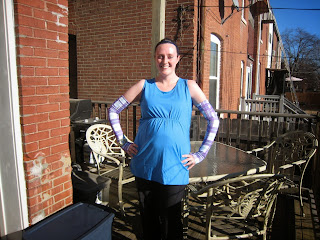 And good news--I ran a little faster than I had previously and had almost NO lower back pain or pinching. I still walked up the hills, which I will probably continue to do. The run felt great, and I was smiling like an idiot all the way through. Glorious day, pain-free run, Christmas, what more could a girl ask for?!?

Next run on deck is tomorrow morning with K. Can't wait! And finally, thank you all so much for the support after my last post. It means so much!
Posted by Joanna at 2:49 PM 5 comments:

It's Tuesday. I know. It's not that I forgot yesterday, or that I absolutely couldn't have found the time to post this. I'm just gonna lay it out there for you: it was that I am completely overwhelmed in virtually all arenas of life and struggled with what to say. I need to ask for a little grace around here. When in doubt, I'll stick to running! That is, after, what this blog's about.

On Running: I went out Sunday afternoon to get in a weekend run. I think I totally made some dude's day when he passed me, looked over (I get looked at a lot these days when I run!), and I said, "Some day I'll be fast again!" He just laughed like, is she for real?? He was probably about 50 and was only running a 9:30-9:40 pace. Needless to say, my run was not my fastest, which was fine. But what wasn't cool--my tailbone did NOT respond well. It felt ok during the run but hurt afterwards. So, back to run/walk for me for a few more days.

On all other things: I am completely overwhelmed. I have a huge work deadline looming in mid-January and a whole series of smaller (but mandatory) deadlines on separate projects between now and then. And beyond those deadlines, work has been bat shit crazy (and stressful) with some non-project things. On the home front: our house is not ready for Christmas. Cleaning up for this has meant getting everything ready to move out of my office into the guest room so we can turn my office into a nursery. We're not there yet. Christmas itself is complicated by family stuff that I don't understand.

There is some beauty in this mess though. Some of my time recently has been absorbed in finishing not 1, not 2, but three Christmas stockings. They are all different color combos, but generally along these lines: 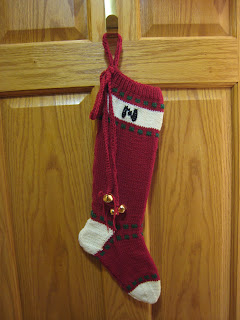 My little boy makes us smile every.single.day. Here's a glimpse of life with a three-year-old: 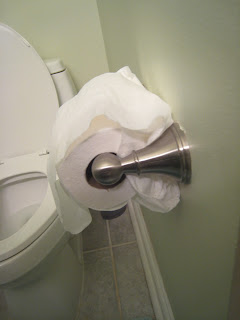 And just this past weekend we got to celebrate the marriage of our friends Chris and Kayla. Their wedding was beautiful and the reception was absolutely the most fun I've ever had at a wedding reception. Uhhuh. I brought my own ball. :) And bowled in a floor-length gown (thank you, Kdot!!). 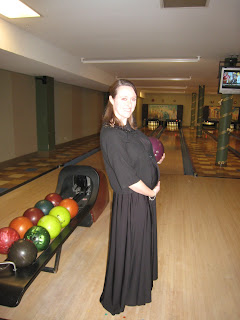 That's what I've got, peeps. Needless to say, I am waaaaaay behind on reading blogs. There is no break in sight, but I will keep chipping away at the Reader list as I can. I promise!
Posted by Joanna at 9:59 PM 5 comments:

Milestones and bellies and shirts, oh my!

This morning I went on my first post-fall run. I went with my neighbor and we took it slow just to make sure nothing hurt. I'm happy to report that I think running is back on! In other news:

I know, it's kind of a crazy announcement. See, a while back The Beastie opened an Etsy shop that mainly sells PhD-themed Christmas ornaments. She's amazing and they are beautiful and if you want to celebrate the attainment of a PhD (or Masters that involved a hooding), be sure to stop by. Well, when I celebrated my 300th blog post I did it the only way I know how--a giveaway of crafty goodness! The 13.1 sign went to Elle and the 26.2 went to Marlene. While talking with Marlene about how to customize her sign, she encouraged me to think big and consider opening a little Etsy shop. Given my already insane schedule, I wasn't so sure. But between Marlene and The Beastie, an idea had been planted. 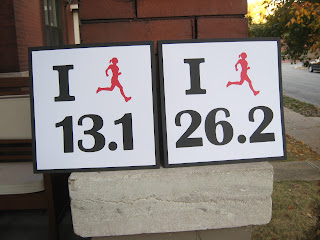 Then, a few weeks ago I was in a craft store picking up the last supplies to finish The Beastie's Christmas stocking (yes, I am the Official Stocking Knitter of our generation, and I love it!! Every generation needs one. It might as well be me!). While I was there, I decided to pick up a 4-pack of empty glass Christmas ornaments and see what happened. At the very least, I thought, I could make myself one to celebrate my PR in Cleveland. Then things got crazy busy around here (like, unprecedented crazy, more on that in a few weeks) and I kind of decided I wasn't going to get to it. Until today. Today I decided I was reclaiming some ME time. So I sat down during the kiddo's nap and made it happen. For me. And the result isn't bad! (there is text on the back, too) 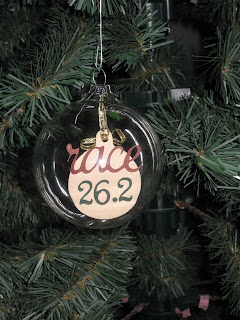 So here I am with the 3 remaining empty glass ornaments that came in my 4 pack, and nothing to do with them. What's a girl to do? Put it on Etsy!! I know, like I have time, but whatever. You only live once. :) So without further ado, here's my shop! Get yourself over there and order an ornament or running sign before they're gone. Order by Friday (or earlier, please!) to ensure Christmas delivery.
Posted by Joanna at 7:00 AM 7 comments: 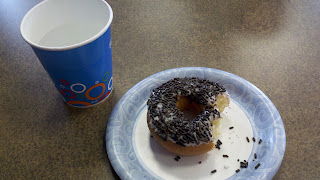 Recently a question of running etiquette was brought to me and I want to turn it over to you. So today's theme is up to you, is it Mondays in Love, or Mondays on Notice? Here's the question:

Dear JoannaRuns,
I know someone who recently participated in a 24-hour walking relay event for charity. After the fact, he realized that he'd walked more than the distance of a marathon, so he bought a 26.2 sticker and put it on his car. 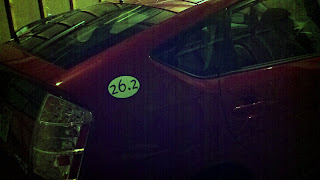 On one hand, he did cover the distance. On the other, he didn't train, didn't have a distance goal, and took many more hours than a marathon would allow before closing the course. Does this count?
Best,
Not a Canadian

Running stats
Miles ran: 46.6 (789 for the year)
# runs: 11 (a little low)
# states: 2, here and Florida
Highlights: The highlight of this month's running was just that I was having an blast a lot of the days I was out doing it. I've had some fast[er] runs this month, have loved the weather, and have just genuinely loved that I'm still able to be active.

Otherwise, in review
November saw me jetting off to Florida 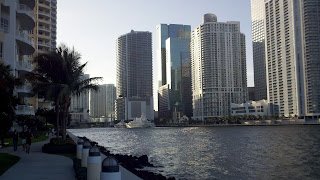 Learning the gender of my bun in the oven (read it here and here) when I was 20 weeks (btw, what a stupid phrase. Who bakes just one bun at a time?) 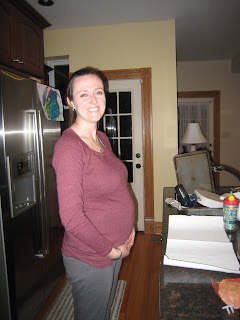 Then later hitting up Chicago with the fam. And, apparently I wear that shirt a lot. I wore it today, too. 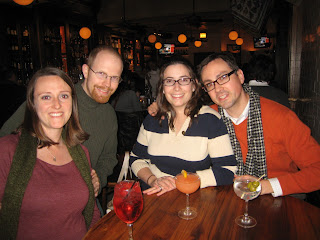 And of course a lot of other fun stuff I didn't post here, like checking out a huge Christmas light display at a local park with my friend Kayla. 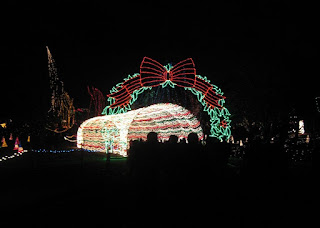 Looking ahead to December, I am SO excited about:
What do you have on the horizon?
Posted by Joanna at 5:00 PM 4 comments: