Mondays in Love: Because We Need Love

Like many of you, I just didn't have words last week. I will never have adequate words about the suffering of those wounded or killed. But I have wanted to write about the truly awesome defiance of the running community in the face of such heinous acts. If reading this helps you, great. If not, that's ok too.

As some of you know, I grew up in a small town in West Virginia. I am a third generation West Virginian, and I'm very proud of that. I am passionate about Appalachia and will defend it any where. I'll also be the first to admit that there are things about its socioeconomics and its sociology that are difficult for outsiders to understand. I've found it difficult, for example, to explain to people the state's motto, "Montani Semper Liberi," or, "Mountaineers are always free," and what that fierce independence means to West Virginians. I've found it difficult to contrast that sentiment of independence with the suffocating social norms of my hometown. I've found it difficult to describe the conflicting realities of startling generosity and nail-toughness, both of which are by-products of the devotion to independence. Independence, and a heritage of tragedy, both man-made and beyond man's control.

The tragedy. My best friend loves Felicity. She has carried this quote around in her head for years: "I'm convinced that tragedy wants to harden us, and that our mission is never to let it."

My bff is the most amazing woman. She has embodied this quote. And yet I've never been sure if our fair state (we grew up together) has. Where we grew up, I always had this feeling that people believed that the best times were behind us.* From the outside, I heard a professor at Penn State tell us one day that "life in that part of Appalachia is hard." What did this mean? That if you face tragedy for long enough, you harden.

I think as a consequence of this, when the massacre happened at Virginia Tech (where I got my Masters just a few years prior), I was afraid that people would see Tech differently, would disinvest in it, that it would become marked. It did not. When the bombings happened last week, I was afraid that the Boston Marathon would be marked. I was afraid that other runners, like me, would think twice before asking their plus-ones, children, nieces, and nephews to cheer for them at the finish. It had been only a week since my precious family stood at the 13.0 mark cheering for me! How could I not be, in retrospect, terrified?

The Lola Papers has it right in her tribute for Boston. The attacks were meant to make a mockery of freedom, and they failed. I heard her read this essay before the STL Unity Run for Boston. She's also right that the spirit of running cannot be broken. She's said all this so well, I will not repeat it.

What I will say is that I got into distance running because grad school part deux was kind of awful for the first few years, and I needed some diversion if I was going to avoid giving up on humanity. Team in Training, and with it my first half-marathon did just that. And now, almost exactly 6 years later, distance running has done that again--renewed my faith in humanity, and my faith in hope, in a drastically more significant way. The response from the running community has been incredible. Arm bands at the London Marathon. Unity runs all over the world. The Boston One Fund, and all sorts of companies donating proceeds from various sales to the fund. Fundraising pages for victims. Runners coming out of the woodwork more determined than ever to qualify for, and to run Boston. It's undeniable. It's unavoidable. It's awesome.

In some part, this is why we run. We are part of this. Running is my freedom, a freedom I have defended. It has been a place to preserve my own humanity and to see the best in others. For that, I have nothing but thanks.

*there are certainly exceptions to this. Wow, are there.
Posted by Joanna at 10:47 PM 2 comments:

Warning: long post!
Race Eve: Friday
I was able to wrap up some things for work late Thursday evening, allowing myself all day Friday to get our house show-ready (it's on the market--first showing happened Saturday!), have lunch with a friend, and pack, and it took EVERY minute of the day to do all that. I even called Mr. Joanna to ask him to come home a few minutes earlier than planned just to help me carry the loads of stuff from upstairs to the basement, trash, or to the Goodwill pile forming in his trunk.* We finally got on the road about 3:45.

We arrived in Springfield just in time for our 5:30 reservation at Saputo's, a well-regarded Italian restaurant in downtown Springfield. The wait staff all knew the patron's names, and the tables around us seemed to be groups of 60+ year old friends who had been gathering there for years. We finally decided that tradition must be keeping this place open, because it was one of the least inspired 3 plates of Italian food we'd ever seen. Everything was either from a can or freezer. It made me wish I had Robert Irvine on speed dial. Regardless, it was a plate of carbs, and that was what was in order. Mission accomplished!

From there we headed to packet pick up, after I may or may not have typed the wrong street name into the GPS. This caused my husband to panic fret over getting lost finding our way in the small and lightly trafficated metropolis of downtown Springfield. I might have also told him to turn the wrong direction once. Seriously, I am the worst navigator ever. We got there. And I wish I'd taken a picture. It was the tiniest packet pick-up I've ever seen for a 13.1. There was exactly ONE vendor there, the table to pick up the bib and shirt, a table displaying the age group awards, and a bulletin board to look up names and bib numbers. That was it. It was probably for the best though since my boys were waiting for me in the car. In, out, and on our way.

We drove just a few blocks from there to the race hotel and got settled in for the night. The baby was just so excited about his first out-of-state trip that he couldn't sleep. It was about 9:30 before he finally gave it up and dozed off. At that point I laid out all my gear for morning and turned in. 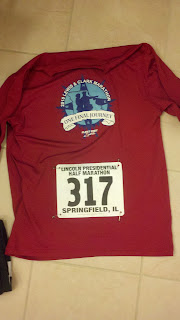 all bibbed up and ready to go 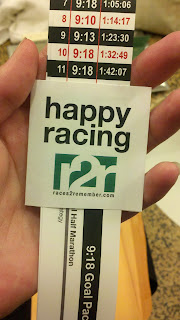 Race Day
Per the usual for race day, I woke up ahead of my alarm and forced myself to stay in bed a while longer. At 5:50 I was up and getting dressed, then made my way downstairs to the Starbucks to pick up pre-race food and breakfasts for my boys. My older son was up when I got back, so he and I sat together in the bathroom and ate our breakfasts together. A little later than I had intended, I did my final pre-race list-checking and headed down to the start line. I found my friend Rachel at the start line, and we stood and chatted for a few until it was time to line up. She headed for the 1:50 pace group, I hung back closer to the 2:00 group. She suggested I get behind them then pass them if I wanted to, but I told her I didn't like being behind pace groups.

Well, that didn't work out for me! We weren't 0.25 miles into the race when the 2:00 pace group passed me. Alarmed, I checked my pace band and Garmin frequently for a while, and I was staying true to my target times, so I decided not to worry about it.

The course is nice--mostly flat, winding through a historic area, downtown, a variety of neighborhoods, a cemetery, and a park. There are a few pretty rude hills toward the end that left me sucking wind for a second, but fortunately I knew they were coming (thanks for the intel, Rachel!) and adjusted accordingly. I got to see my little cheering section (husband & two boys) just after the start, around mile 2, and at 13.0. I can't explain the joy it brings me to see them on course, and to hear them cheer for me. Magical. Precious.

I had support from afar, too. My old friend Coach Mike had left me some words of encouragement pre-race, and they became my mantra throughout: "Run easy, run free." I love that! And that's how this race felt--comfortably hard, like race pace should feel, and FREE. I was that crazy lady smiling all the way through the race, thankful that I am able to do it.

I have to give a huge shout out to the race organizers. Especially for a race of only ~1500 participants, it was put on very well. There were gobs of volunteers at every aid station, the aid stations were well placed, and they had just the right combinations of water, Gatorade, and even Gu available at just the right places. The start and finish areas were managed well too, and the post-race spread was impressive.

All the way through, I relied on my trusty pace bands, hitting each mile within a few seconds of the target pace, with a few more like 10-15 seconds faster. I didn't catch the 2:00 pacers until about 12.6 miles, which kind of freaked me out more than once, but at each mile I checked my overall time and my mile pace and knew I was on target. Rachel had told me that if I had anything left when I got to 12.0 to just let it fly because the last mile was flat, so I did. I was having a blast. When I saw my boys at 13.0 they captured the moment--me (in the red) with a big smile plastered on my face. 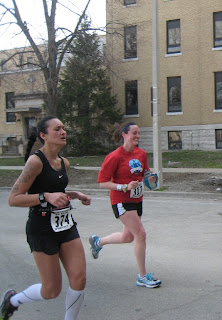 Just after this picture, I rounded the last corner into the straightaway. I knew I was under 2 hours and just focused on finishing strong. 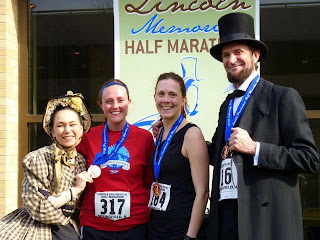 with Mary and Abe and our giant honking pennies at the finish!

This was not a PR, but as I said, I wasn't aiming for a PR. This was my post-baby return to racing. Rachel asked me at the start line if I had a time goal. I hesitantly said I was hoping for sub-2, but that the stars would have to align just right or it wouldn't work. I'm thrilled that the day came together with 39 seconds to spare.

Post-Race
After the race and getting cleaned up, we headed to Champaign to see relax and see friends. We had a great time! We stayed Saturday night with some of our favorite people (who happen to be our boys' Godparents!), and on Sunday had breakfast with an old, wonderful friend who just successfully defended her dissertation (Dr. Ears!!), and went to our old church and saw friends there.

It was a great weekend. I enjoyed the race (I smiled on and off all the way through!), finished strong, saw friends, and had relaxing down time. Honestly, I am so thankful that running gave us the extra encouragement to plan the much-needed, long-overdue trip to central IL.

* true story: my husband's car was once burglarized while it contained nothing other than a Goodwill pile. It was great. Totally saved us the trip, and probably got to someone who could use the stuff any way. Ah, life in STL.
Posted by Joanna at 11:50 PM 5 comments: