Oh, where to even begin?? I know what you all want. You want a finishing time. But that's at the end of the race, so you're going to have to wait. :) I will tell you that I finished in one piece and I PR'ed, but it's a whole lot more complicated than that, unfortunately. Sit back and relax. Story time.

Pre-Race
My flight out of StL was at 8am on Saturday. As the trip started, I started reading Matt Long's The Long Run, great inspiration before a race! Total tear jerker though. I had to stop reading sometimes to keep from crying in public. RUNNERD, party of one! I arrived in Cleveland in time for lunch, which I had to force myself to eat. All told, a smooth trip.

Sidebar: I want to give a big shout out to Cleveland for a minute. You don't hear a lot of awesome things about Cleveland, so I wasn't sure what to expect. It was great. It was super easy (and only $2.50!) to hop on the train from the airport to downtown, where the terminal was centrally located and easy to get to and from. The downtown itself is surprisingly nice--beautiful buildings, shopping, walkable.

Before checking into my hotel, I went to the host hotel and caught the shuttle to the Expo, which was about 15 minutes away in Euclid. The Expo was about what I would expect for a race of 18,000 people. Lots of vendors, some big names, good energy about it. I picked up my packet, wandered around for a while. Bought a marathon magnet for my car. Then, just as I was leaving--I was maybe 10 feet from the door--I saw some girls looking through their packets and I thought to myself, I hadn't actually looked at my bib. I don't know why I even thought it. Or why I stopped (after a moment of deliberation) to do it then. But I'm glad I did. Because there was no bib in my race packet. WTH?!? I quickly made my way back to the packet pick-up area and immediately saw my bib in a small pile that had been left behind. I grabbed it, relieved, and then went outside to wait for the shuttle back downtown. 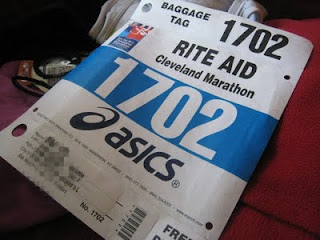 I made my way down the street to the Marriott. (huge high-five to them, btw. It was a great hotel experience, especially during a stressful time when the hotels were overbooked and downtown was crazy busy). I got myself all checked in and settled, bought a banana for the next day and some snacks for that night. Took in the view, to which the picture doesn't do justice. 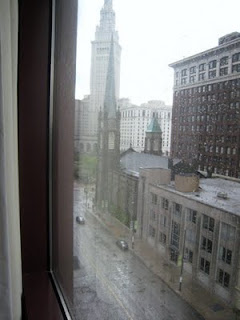 I read for a while and relaxed, and before long headed to the race-organized pasta dinner, where I was to meet up with some other bloggers. The dinner was held on the ground floor of the Hyatt, which is gorgeously renovated. 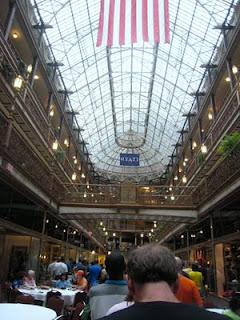 I didn't see any familiar faces at first, so I got some dinner and sat and just chatted with people around me. This included an older couple, the wife of which was their official photographer. They were completely adorable. Then there was the vaguely eastern European training group that didn't talk at all. It was quite the mix. After a while Jodi and I found each other and I got to "officially" meet her, Jenn, and Dave, and I'm so glad I did! I had such a good time with them. You can read a bit more about how Cleveland became a "destination" race over at Dave's blog. Yeah, I'm not one to mince words.

Back at my hotel, I settled in for a night of pampering. I opened my 1,200 calorie box of whoppers (because, really, when else can you get away with buying crap like that?!?). Gave myself a pedi. Watched tv. Read my book. Thought about the race, strategy, and trying to visualize going through it. Laid out everything for morning. 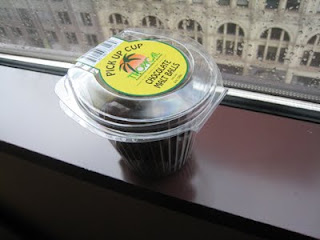 But most importantly, I talked to my boys. I heard my son say, in his precious almost-three-year-old voice (with, I'm sure, some coaching from Mr. Joanna), "Good luck tomorrow. I love you!" And that was all I needed to hear.

Unfortunately, I slept like crap. I must have woken up 4 times in the 6.5 hours I was in bed. At 5:15 I was up, getting dressed, going through all the motions, and at 5:50, headed out to meet the bloggy crew. I was barely inside the Renaissance when I heard Morgan (who I met at Martian back in April) yell my name from above. She was there with Spike, B.o.B., Jen B., and the group from dinner the night before. It was the burst of sunshine I needed to get me going. We laughed, hugged, got all geeked out about the race, and headed out. I walked part of the way to the start with B.o.B., who is just as lovely in person as she is on her blog. It was great meeting her! I split off from the group to go to the bag drop (which was chaotic), then headed to an over-flowing start area. No one could get even close to their appropriate starting area (signs with paces to let you know about where in the pack you should be). So I lined up where I could find a spot, enjoyed the national anthem, and waited for the gun.

I wish I'd known what was about to happen, and at the same time, I'm glad I didn't. I'm afraid that if I'd known, I might have walked off the course at that moment and gone to the Rock & Roll Hall of Fame for the day instead. And that, after all, is NOT what I spent 16 weeks training for. Stay tuned. Part 2 is coming shortly, with all its gory details.
Posted by Joanna at 9:57 AM

Wow! You know how to leave us in suspense!

It was so awesome to meet you. Great part 1. I haven't had a chance to do my part one yet. Perhaps I can just type ditto and send people to Jenn and Dave's blogs since they have done theirs. HAHA!! Great job this weekend!!

Ok I am definitely in suspense because when I saw you, you looked amazing!!! So happy I got to see you again and before your race, looking forward to reading the rest and sorry for missing everyone at Mile 6ish, I made a huge spectating FAIL and got us lost! :(

Cliff hanger!! So glad I saw the next segment already posted so I DONT HAVE to WAIT! lol

yay! so happy i got to meet you and congrats on an AMAZING finish!!!