March of Dimes and bday recaps

The last few days have been a really happy time for me. My birthday was nothing short of fantastic and I got to run a 5k on Saturday for a good cause. {long post warning!} 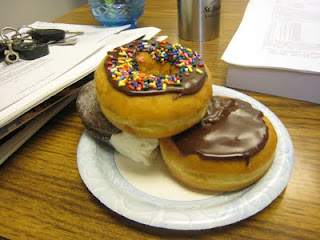 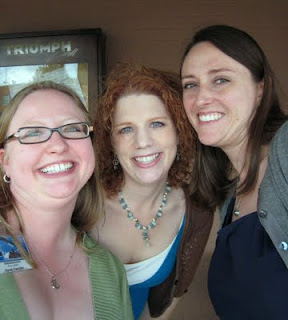 All told, it was a great birthday/weekend with friends near and far. And the weekend was great for another reason, too--I got a new 5k PR in a race put on by a great organization, March of Dimes. I'm pretty sure the swag was worth more than what I paid in entry fees--talk about a win-win! Here's the recap:
The 5k was much smaller than the 2 mile walk, and started 5 minutes earlier. So the line-up was small, and there wasn't a starting mat. Everyone's start time was gun time, even though it was chip timed. They counted down and sounded a loud horn and we took off, going immediately down a short hill to start. I couldn't help myself, I just took off! I looked at the Garmin about a minute in and saw that I was under a 7-minute pace. Ooops! Had to rein it in, so I did, at least a little. The first mile ticked off pretty easily, at a 7:32 pace.
Early in the second mile I caught up to a dude about my age. As I came up on him I saw him look over at me. He might as well have said it out loud--he did NOT want to get chicked! He picked up the pace and got about a shoulder ahead of me. He held on for about 30 seconds then "pulled over" and slowed way down and let me pass him. I'm pretty sure it was my only chicking of the day. I'll be honest--it made me smile. :) About half-way through the second mile I was surprised I was still holding my pace and feeling good about it. It started getting hillier and windy farther into the mile. Mile time: 7:45.
At the beginning of the third mile I faced the steepest hill yet and was running into stiff wind. I was working hard and not moving very quickly. I kind of wanted it to stop for a minute, but I knew if I gave up for even a second I would hate myself for it at the end. I remembered my mantras and dug in and pushed. My pace follows the same curve as the elevation changes pretty closely. Mile time: 8:01.
In the last tenth I took off, per the usual. As I crossed the finish the timing crew started waving a thing like a ping pong paddle at me. Have any of you ever seen timing done like that? No finish mats, but hand-held sensors? It was a first for me. I wondered how they would handle the clumps of people.
Total time (and new PR): 24:13. woot!!
I made a new local runner friend while waiting for the awards announcement. Then the awards came and something totally unprecedented happened: I took second overall for the women! Even though it was a really small race, I couldn't believe it! I got a little trophy, which my son has since confiscated and calls it the Piston Cup (since, of course, all things revolve around Cars).
After the race, I headed out for a loop around the park to finish off the rest of my miles for the day (12 total). It's really not my favorite place to run, but the change of scenery was nice, and the weather was great. Overall, it was a great birthday and weekend. Thanks to everyone who was a part of it!
Posted by Joanna at 7:06 PM

CONGRATS! Second overall is so awesome!!!! What a fantastic weekend for you. Keep up the good work!

Congrats on the PR and the 2nd place finish!

You have a great hubby and little guy:)

I was actually listening to a bit of A Prairie Home Companion yesterday when I was driving around.

Congratulations on your PR and 2nd place finish! That's awesome :)