Buffalo Trace Trail Run (5 mi.)
Yesterday morning was my first ever trail race! If you'd put me in a black & gold uniform, I could have easily been convinced I was reliving a high school cross country meet. It felt just like it. Running on a hilly path on mowed grass trails. This one was a bit muddy, but that was half of its charm. The course was five miles long, through the same park we run every Saturday. We always run the bike path and I'd actually never been on the trails, so it was a fun switch up.
It was crazy foggy when I left my house. At the parking area I saw RunningFirst and The Gangsta (Music Says it Best). You can see behind us how foggy it was. We walked over the start area and got settled in. 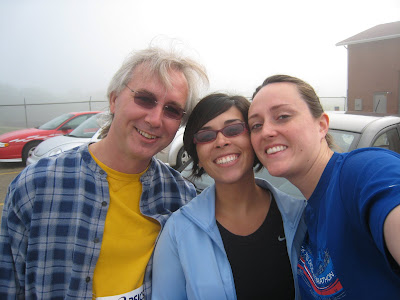 RunningFirst, Damaris (The Gangsta), me, pre-race
I'd never run a truly local race. The feel of it is so different! It was much smaller (188 finishers), no timing chips, very relaxed. I really enjoyed it. RunningFirst took off way fast, but I suspected I would eventually catch him, which I did around mile 3.75. We chatted for a while before he sent me on ahead to the finish. Allison TORE IT UP, winning third place in her age/gender division with a time of 42 minutes and some change. 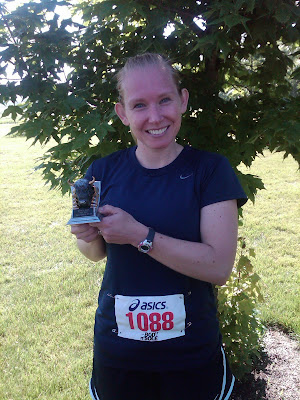 Allison with her Buffalo Trace trophy
The Lifesavers came to cheer for us, and on man did they ever! We must have seen them 3 or 4 times throughout the course, including the finish. It felt really weird to be out running on a Saturday at the park without Meg. WEIRD. We all missed her. My finishing time was 46:48. Not as fast as I think I should be doing; I've seen slacking since the Illinois half and was just out for fun. Or that's what I'll tell myself, anyway. :) 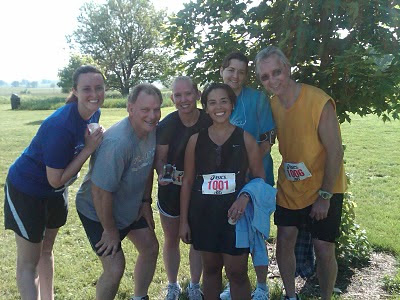 Our group post-race: me, Lifesaver, Allison, The Gangsta, Mrs. Lifesaver, RunningFirst
After the race we went out to breakfast and basked in the sun. It was such a beautiful day. We came home, disassembled a futon to give to The Gangsta, and then.....
The EPIC FAIL began
When Mr. Joanna, the babe and I got home from breakfast, I said I wasn't feeling so hot. I didn't think much of it. One of The Minnesotans had a cold and I thought I picked it up from her. By 3pm I suspected I was coming down with something more flu-like. By 5pm I'd confined myself to the bedroom/bathroom, engrossed in my misery. By 6:40 I was on the phone with the patient advisory nurse at the hospital, who told me that since the pain started before (and likely therein caused) the nausea, I should go to the ER immediately.
By the time we were halfway across town I was more or less in tears from the pain. The babe kept saying "Momma hurt? Sowwy. Sowwy." I told him it wasn't his fault. I think he associates apologizing with painful situations rather than with blame. It was adorable, although I really didn't want for him to feel responsible. Mr. Joanna dropped me off at the ER so he could go home and get the babe to bed. I was in all-out crying mode at this point, and just cried through registration and triage, even accepting the wheelchair to go the 10 feet between the two. They immediately took me to a room, where I practically begged for anyone to do anything to make the pain go away. The nurse put an IV in me and went to get a doctor to prescribe Demerol for the pain. It was probably less than 10 minutes, but it felt like an eternity. Once the nurse injected it into the IV, it was probably less than 6 seconds before my hands were tingling and the pain was completely gone. It was incredible. I felt loopy and fine.
While hanging out, pain-free, I called Ears to ask if she could take me home when all was said and done. She said she could, but that she would also come and sit with me in the ER so I wouldn't be alone. Around the time she got there, the doctor asked if I would consent to a CT scan. Long story short, I did, I drank the radioactive Gatorade, and they put me in the giant donut-esque machine.
About 30 minutes later, back with Ears in the ER room, the doctor came to tell me I had appendicitis and they were prepping the OR for me. That a surgeon would be down shortly to go over the procedure with me, and it would be removed that night. I'll be honest, I was a little scared. I got changed into my super-fashionable hospital gowns, hugged Ears, got back on the bed, and was rolled down the hall to the OR.
In the OR, I didn't really think about why there was a mask on my face. I thought we were chatting and setting things up and it would be a few minutes. Wrong. The next thing I knew I was waking up the recovery room with Mr. Joanna next to me (Ears had gone to stay the night at our house with the babe, because she's amazing like that). I'm told my speech wasn't too coherent for a few minutes, though I was trying really hard to keep it together. One of the first things I asked was how soon I could run. I was heartbroken when they said two weeks. Two weeks?!? Are you flipping kidding me?!? But to be fair, I couldn't run right now if I had to, so I guess it's a good estimate. I have three small sets of stitches and some other gory details I'll spare you of.
After I could talk reasonably and could get up to walk around a little bit, they discharged me and we came home. I slept until 11ish this morning, then got up to, of all things, help Mr. Joanna get ready for our open house. He was amazing. He simultaneously prepped the house, watched the babe, and took care of me. He's amazing. We got the house ready and left to hang with some friends. I can't believe we still held an open house. Ridiculous, but it needed to happen.
So, I'm on a lot of drugs for the next day or so, can't bathe or drive until Wednesday morning, and can't run or lift heavy objects (including my son-sad!) for two weeks. Looks like I'll have plenty of time to make headway on the babe's Christmas stocking, which I finally started (with some help from Dorie) on Friday. 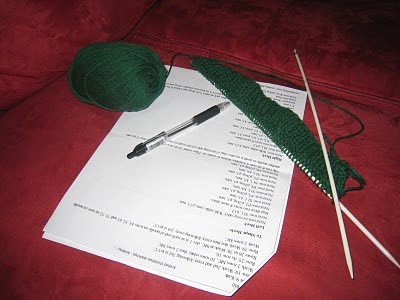 Really glad you are doing ok. I'll have to run slower so that you don't get hurt trying to keep up. :) jk. Don't worry about losing any strength or endurance. You will get it back quick enough.

If you or Mr. Joanna need any help with anything holler. We will all be around.

Dang. I still can't believe this whole appendicitis episode came on so quickly! I'm glad the problem was resolved so quickly. Did they go through your belly button? I have a big scar from mine.