I just got home and got cleaned up from the Illinois Half-Marathon. What a morning. I'm going to try to get this recap down before I forget any of it.
About 6:45am Meg and I parked and walked toward the start area. We ran into Mr. Lifesaver and The Gangsta and chatted with them for a few. Everyone was feeling pretty good. All pre-race rituals had gone as planned. But after a few minutes the inevitable pre-race nerves sent us to the porta-potty line. Then as soon as we were finished it was time to line up.
We had the sweet irony of lining up right in front of a very loud woman talking about how her running partner likes to talk a lot while running and she doesn't, and eventually tunes the partner out. We might have moved away from her, but the starting corrals were packed to overflowing. Finally the one and only Katherine Switzer told us to get on our marks, get set, and go (Katherine Switzer!). And we were off.
We decided to run with the 2 hour pace team. We actually started a little ahead of them and, I thought, would stay ahead of them for a while. Maybe half a mile in they passed us and I realized we were off to a slower start than intended. It didn't help that my right shin was mostly numb for about two miles. But, by the end of two miles the shin was loosened up and we'd settled into the pace. Us and a street crammed full of other 2 hour (4 hour full) hopefuls. There was a lot of elbow bumping and accidental kicking. At the 2 mile mark we were at 18:22, right on pace. And bonus--I thought we'd only gone 1 mile. That second one just happened. Woot!
We saw our awesome cheering team (Ears and Mr. Ears, Mr. Joanna and the babe) between miles 3 and 4. We were sweating like insane people in the humidity (thank you, huge storm last night) but keeping the pace pretty well. Between miles 4 and 5 we started letting the pace team slip away and frankly, we were both pretty miserable. By mile 5 I wanted to quit and walk the rest of the race (but did not say this out loud). Miserable. Then around mile 5 our cheering section came through for us again and we kept going.
Around mile 6.5 we came through a big water/Gatorade stop that we'd planned to hydrate at. By this point I had taken to dumping water over my head to keep from overheating. We got through the water stop, saw our cheering section again, and started the 1 mile trek toward the Meadowbrook Park loop of the race (miles 8-9.75). Coming up a hill around mile marker 9 I just stared at the shirt of the woman in front of me, and mentally just let her pull me up the hill. Once I got through that the race got a lot easier for me. The humidity had partially burned off and we enjoyed considerable shade through this section. At mile 9.75 we came through another big water stop, where I drank Gatorade and poured more water over my head (which a lot of people were doing at this point), and we turned up Race Street.
Around mile 10 we saw our cheerleaders for the last time. They are amazing. Driving all over to keep cheering us on. Amazing. I have the best friends anyone could ask for. I kept telling Meg, "let's get up Race, just get up Race." We finally got to Pennsylvania and were barely around the corner before we saw Coach Harley (who ran a 2:37 at Boston--I think he might secretly be a gazelle) wearing sparkly green shamrock antennas and cheering us all on. Incidentally, his sister was the speaker at last night's Team dinner. Pretty amazing people.
At mile 11.5 we split from the marathoners and turned toward finishing the race. We ran west toward the stadium for what seemed like forever, and then we could see it: the last turn before the stadium. We skipped the last water stop and just pushed forward. Into the stadium, onto the field, under the clock, and finished.
Official time: 2:07:30. We got a new PR for Meg, and one that I'm insanely proud of her for toughing it out to attain. There may or may not have been a few tears shed at the finish line, for a lot of reasons. Exhaustion, for one. But more importantly, because this was not just about running. This was about the fact that we've used running as a survival mechanism while she went through Vet school and I got a PhD. This was about a friendship that started through running and has grown so far beyond it. I am not ready for her to be 1800 miles away.
We wandered through the finishers' area for a while and stretched, then walked past the food stations as quickly as possible and exited the stadium. It took us a while to find people, but we did finally find out how everyone did.
Mr. Lifesaver turned in an absolutely incredible, record-shattering 2:17:15 with Meredith.
The Gangsta set a new PR--but wait for her race recap for details and time. I'm not going to spoil it for her.
Coach Paula ran a 2:26:41. I don't think it's a PR for her, but a good time nonetheless.
AM also met her sub-2 goal squeaking in with a 1:59:56.
RunningFirst made the hard but wise decision not to run this morning. I'm counting on this to motivate him to run his heart out at Lewis & Clark this fall.
Before heading out, Meg and I got a post-race picture. This might be my favorite of us! I need to get the Expo and pre-race pics from The Gangsta, so hold tight for those and for a product review of the Bondi Band (as seen below)! 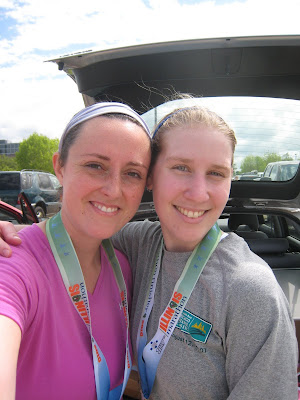 i love this pic! you guys ROCK. :) And I'm sooooo proud of Randy! He's amazing.

Congrats on a great race! And it is freakin' humid out! Good for you for toughing it!

Sounds like a fun day even with the heat!

Good job on the race. It was humid saturday morning. I was hauling bags of mulch and sweating (though nowhere near the workout you two did).

Congrats, and yes, the L&C is up for grabs. Help keep me motivated.