Name that tune! Anyone?
Hint: it's from the late 90's. Anyone?
Why the post title? Simply put, we're undergoing enormous life changes and have a lot going on. Some elements of this craziness are irritating, and the stress of it all makes me a little less resilient than normal to the things I would normally see coming and brace myself for. Such is life. While stress is detrimental in most ways, it's often actually a good thing for running. Take today. I had an awesome 4 mile run. I felt like I could have run forever. It was fast and glorious.
Except for the brief on-course entertainment by the I.T. Band about halfway through.
(Sorry, that's a terrible joke. And not even original. And those of you who don't run probably don't get it.)
Anyway, twas an awesome day for running. On deck:
1. all-out mile scheduled for Wednesday. Never done one before--wish me luck! Shooting for a 6:59. Can I do it?!?
2. long-run next Saturday early morning, probably 6 miles
3. Trail race the 22nd
mileage: 254.5 + 4.0 = 258.5 miles
Warning: this is about to get super eccentric. Back away slowly if you can't roll JoannaRuns-style.
I spent all day yesterday at a crop (scrapbooking get-together). I wanted to share one of the layouts I made because it involves two of my friends (the Minnesotans). In September of 2007, Mr. Joanna, the Minnesotans and I went to an ornamental grass festival. You heard me right. An ornamental grass festival. Why? Because it was something to go do. Because it was outdoors on a gorgeous day. Because it was in a small town none of us had been to. So we went. I just got around to scrapping this yesterday, and in honor of the fact that it was a completely ludicrous thing to attend in the first place, I made a completely absurd page for it. This is not, by any technical or artistic standard, a stand-out piece. But it is ridiculous, and that was the point. Can you say bedazzled Gothic lettering? Yeah. That just happened. See below or check it here. I should probably have added ribbon to the bottom, but was running out of time and didn't think of it. 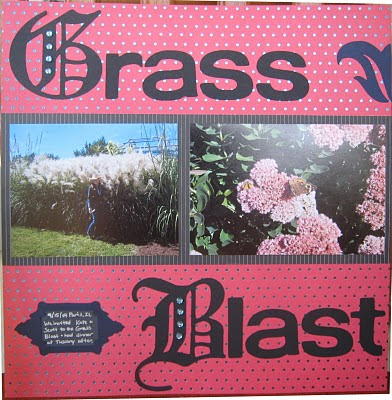 Obligatory note on Mother's Day
I had a lovely Mother's Day! Mr. Joanna and the babe bought me a blue glass vase and....wait for it...Kill Bill Volumes 1 and 2. "Volume 2 focuses on a mother-child relationship. What?" Riiiiight. Remember when I told you we watched Inglourious Basterds on Valentine's Day and The Hangover on our last anniversary? I think I'm sensing a trend here. Totally inappropriate movie viewing (not like that! jeez!!) in lieu of sappiness. I know. I just lost a Chick Point.
Posted by Joanna at 8:43 PM

I may also be doing an all-out mile this week with a runner friend who works with Justin. I'll keep you posted. GOOD LUCK - I'm pretty sure you can rock that 6:59!

I can name that tune in another line of lyrics....

Hi
The scrapbook task sounded an ideal way to express yourself at a stressful time. You could easily have taken a more negative route so good for you.
Ste