We had a great group show up last night for our first outdoor (wootwoot!) track practice of the season. It was RunningFirst, the guy who wrote the Life Saver post and his wife (long time alums of The Team), Dr. Speedy, Meg, and me. Except guess what? I was the only person who ran the workout! It was Joanna vs. Joanna in a battle of 5 x (2 min fast + 2 min slow). Meg ran most of it, to give her credit. RunningFirst was allegedly timing us & counting the intervals, and Mrs. LifeSaver is nursing a bad injury. With our warm-up and cool down I put in 4.5 miles. It was a gorgeous evening and I was grateful for the structured workout.
Until Mr. Run-the-Wrong-Direction-on-the-Track showed up. The first few times we passed each other running in opposite directions on the track, both in the first lane, he clapped at me as if to say, "hey, good running!" I may have smiled or nodded at him the first time, but after that I started glancing at him in annoyed wonder or avoiding eye contact. By about the 4th time we passed, still with both of us in the 1st lane, I wanted to clothesline him. On lap 9 RunningFirst told him to turn around. On lap 10 I told him. It would have been much less annoying if he'd moved to an outer lane while running in the wrong direction. During the cool-down we saw him talking to RunningFirst (our coach). We assumed he was asking about track rules or about the Team.
Turns out I don't know what they were talking about. When Meg and I started to leave the track, he walked up to us and started asking questions about joining our group, what we do, where we meet, how to contact the group, etc. I was totally creeped out. I wasn't about to give him information about where we meet on Saturdays, my personal contact info or that of Meg or RunningFirst. But he kept asking questions as he followed Meg and me toward our cars. Finally I ripped the cover sheet off an old Team training schedule so he would have the Team in Training website, which seemed harmless. The whole time I was getting it out of my car I was thinking, "Meg, don't leave me, Meg, don't leave me!"
In other news, my MIL sent the babe a box of St. Patrick's Day goodies, including a themed shirt which we dressed him in yesterday. I couldn't resist taking some pictures while we played outside after work. 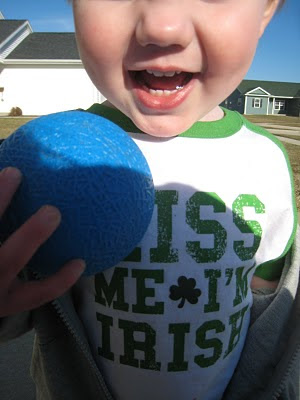 what a creepster! that would've totally weirded me out. i love the pic of the little man. he's such a cutie!
good job on a good workout. my schedule called for a 7 mile tempo run last night. i was soooo glad when i finished. that's for sure!

7 mile tempo run, that's harsh! when I do tempo runs they are never that long. I think I need pointers on doing them effectively, though. Good job on getting through it! And thanks for the comment. :)

Seriously, though...how can you NOT know the direction to run on an outdoor track? I would've clotheslined him, too!!

I appreciate your PO very much the picture with the article. Continues to refuel!!

i absolutely enjoy your own posting taste, very useful.
don't quit and keep creating due to the fact it simply nicely to look through it.
looking forward to look into way more of your current articles, regards!