Maybe 6 weeks ago I called my brother, ODP, and we randomly picked a weekend that looked good for a visit. So this past weekend the babe and I went to Detroit to visit Kdot, ODP, and The Princess of Detroit (their 1 year old--this is their nickname for her). It turned out to be a great weekend for a getaway. We've had SO much going on in our lives here that the away time and silliness was much appreciated, plus it was a great excuse for the kids to see each other. Here are some highlights from the past week, including the trip (which I'll have more pictures of in a few days).
The Bestie
I had to cancel my weekly lunch with The Bestie last Tuesday due to a house-related meeting. I was pretty bummed about this. So when hunger struck at 11am on Wednesday, and my brown bagged lunch looked unappealing, I shot her an email asking if she was up for an impromptu lunch together. After a few emails back and forth we decided to make a dash for it and make it work into our essentially conflicting work schedules for the day. I know an impromptu lunch doesn't sound like a big deal, but it's pretty unusual for us and it was a great time. I also learned a few funny things about her but I think she'd kill me if I posted them here.
Meg
With me out of town and with her constantly hectic work schedule, Meg was left to fend for herself for this weekend's 8-miler. But oh man, am I sorry I missed it. I had this email waiting for me upon my return:
"Dude, running 8 miles without you on a cold, overcast, windy day sucks....And I lost my shorts around mile 5. Yes, I was wearing tights, but it was not a hot look."
Enough said.
ODP
My college roommate had a Redneck Point Allocation System for estimating how redneck someone might be. She allotted me a substantial number of points simply for being from West Virginia. It is true that when you're from where I'm from, you are given a certain amount of redneck points at birth. I've heard it said (jokingly) that all babies born in CA are given sunglasses and bathing suits at birth. We're given redneck points.
I choose to display my allotted redneckedness in a few key areas. I have a healthy level of suspicion about both The Man and the government. I am more or less completely undiscerning about food unless it's escargot, wine, or chocolate, which we can safely blame on my time spent in France. I have a totally unwavering love of sheet cake. And I slip a casual "y'all" into conversation every now and then. ODP, on the other hand, keeps his redneck points in a Swiss Bank Account, metaphorically speaking. He would really rather pretend he didn't have a redneck point allocation stemming from birth. And you would almost always believe him. We wears a kimono as a bath robe (it's not as crazy as it sounds, actually--you'd have to see it). He likes Russian baby names. He owns an espresso machine. And all sorts of other things he would kill me for posting.
He even almost had me convinced that he'd sold or somehow dispensed of his redneck points. Until I discovered the stewed tomato can in his refrigerator. After using part of the can, he'd resealed it....with duck tape. I wish I'd gotten a picture, but fortunately for him the camera was in The Princess of Detroit's room and the kids were napping.
Today's Run
I tried to run in Detroit, I really did. Friday afternoon I was beat, and it rained the rest of the weekend. So, no dice. But it was OK. I really did need some down time. So today I made up my missed 8-mile long run. I could hear Meg cursing the windy, overcast weather she'd faced, as I faced it today (although it wasn't cold, at least). I did a 4-mile loop around my neighborhood twice. Between loops I stopped at my house to ditch my jacket and grab some runner food. It's been a long time since I stocked up, so I was stuck with my Gu Chocolate Outrage that I got at the Detroit Marathon in October. During the race I carried it as a back-up (read: security blanket) in case of an energy emergency. Since then I've been pretending it wasn't in my kitchen. Truthfully, I've always dreaded Gu. I always thought it had the consistency of half-set Jello, which makes me want to wretch. So it was with MUCH apprehension that I tore open the pack today and tried it.
It was freakin' delicious! Look at this--I squeezed that packet until it was FLAT! It was way more like chocolate cake frosting than half-set Jello. I might be a new believer. Maybe. 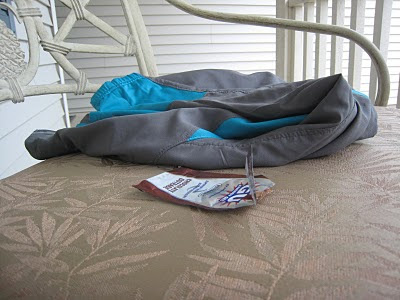 I laughed out loud when I read the part of the post about lunch. :)

I have to sympathize with Meg, because I just went for a walk last week and I MISSED YOU. I can't imagine running 8 miles by myself.
Loved the sheet cake comment. It made me smile. We may have to find you a nice bakery in archtown.
Glad you had a nice time in Detroit.

okay, is ODP seriously going to eat out of that resealed can?!?!?! EEK!

And while it was raining down by you, it's been nice and sunny up here!!

I still want to know how you lose your shorts while running. Granted they may fall down, but then don't you fall down?

How did they fall to her knees, keep sliding downward and then left foot comes off the ground and steps and then right foot follows - without missing a step. Unbuulievable.

I hope to see a reenactment of this incredible feat of coordination at the track tonight.