Mondays in Love: News from Life

I have news. HUGE news. News that cannot wait until the end of a weekly training recap.


We are moving to SLC, UT this summer.

!!!!
(yes, the exclamation points get their own line)

Part of the circus that kept me so busy over the winter (you know, other than having a less-than-12-month-old baby), was being on the academic job market, which is its own beast.* The outcome is that I've accepted a new faculty position. It's a wonderful opportunity, though one that means leaving STL, which is a very bittersweet thing.
(I have no idea how the formatting got all messed up here, and I don't even know what it originally said--edited to at least be legible!)


We moved to the Midwest almost 8 years ago, I think honestly never really intending to make it our long-term home. I think we both kind of thought we'd come for 4 years so I could get my PhD and we'd head back east. And yet this became our home. Over the 5 years the degree ended up taking, and the 3 since then that we've lived in STL, we developed friendships we will have for the rest of our lives. We had kids. We both built our careers. We fell in love with corn fields.

Ok, that last part is a lie. I still miss the mountains.

The decision marks a great opportunity, with a bittersweet farewell to a place we've loved. They don't call the immediate post-PhD years "The Gypsy Years" for nothing. In many fields, a post-doc (or two, or three) is required before a tenure-track faculty position can be acquired. In my field, post-docs are not required (though they do exist), but it is not uncommon to move from one university to another.

I have already been scouting out running groups in our new city and good news: there is no shortage of outdoor fitness enthusiasts there! More good news: I already know the scenery is great, from a run I did there about a year and a half ago and 100% enjoyed. 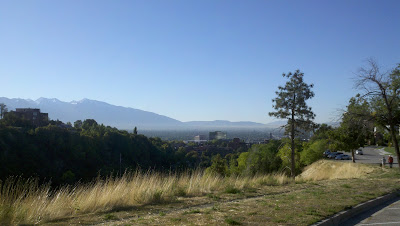 So while I'm piling on the miles for the next 2.5 weeks before my 13.1, I will also be frantically staging our house for the market, finding movers, searching for housing there (online), etc. It's going to be a crazy spring, and a whole rest of 2013 filled with new adventures!

*The academic job market is really a bizarre beast. I've been asked enough times how it functions that I thought this might be of interest to people. In my field, which at least generally resembles most in this regard, the job market kicks off at our fall academic conference, usually in late October or early November. Jobs are posted in the weeks leading up to the conference, and for many weeks afterward. Applications are due generally beginning in November and ending perhaps in January for tenure-track positions. Applications are screened and reduced to a long list from which phone interviews are conducted. From the phone interviews (usually), a short list is created, and three candidates (usually) are invited to campus, generally in late January through mid-February. The on-campus interview generally goes from dinner the first day through breakfast on the third day, including a 60 minute public research talk, one-on-one interviews with faculty and the Dean, and group interviews with faculty, students and sometimes groups from the community. An offer is extended anywhere from the day interviews end to weeks later when university administration finally approves the offer. Candidates generally respond within 10-30 days, at which point either a contract is signed or the offer is made to a second candidate. This process is usually wrapped up by April or so. Most faculty positions have a start date of something between July 1 and August 15, or roughly 9 months after the initial application was submitted. The odds of securing a tenure-track position vary substantially from field to field, but within my field I've been told that I was in pools of anywhere from 45 to 150 applicants for each position. Once you accept a tenure-track position, you generally work 6-7 years toward tenure, with a major review during year 3. Expectations vary from field to field and university to university, but virtually all faculty positions at research universities come with 40% research (grants and publications), 40% teaching (3-5 courses per year is normal) and 20% service (university committees).
Posted by Joanna at 10:11 PM

Such exciting news! Congratulations on the new job!

I had to laugh when you wrote about faling in love with corn fields..HA! My little sister went to college in Nebraska and couldn't believe how many corn fields there were and how that was all you could see sometimes.

COngrats on the new job!

Well, as you know our feelings about this big change for your family are certainly mixed. We delight for your new opportunity but will miss having you close! "The godfather" is mapping routes via car and plane!
I do have a "how does academia work" question.....what does this mean for your P&T progress? Do you get to count your years in SLU or do you start over in SLC? Please explain....

That is big, exciting news!!! Congrats to you on the new gig and the new digs!

Great news! Congrats on the new job.
Glad you can run as you like in the new city.

How exciting... congratulations to you. Big move. I looove moving!

Wanted to tell you my 13.1 sticker arrived... thanks so much! Hope you will do this triathlon again next year!

Good luck with the move and congratulations on the new job!