We're there, folks--the third trimester has arrived! I so enjoyed writing my first tri{mester} wrap-up post, I decided to do it again after the second. Above all, I'm incredibly thankful that I am still running. But, running is not what it used to be!

On Miles
My mileage consistency has been so-so. Excuses Scheduling conflicts included below. Don't get me wrong here--the mileage is not blowing any one's hair back. Most "normal" weeks I've been around 12ish miles per week, and I've been fine with that. I've been particularly pleased by my gradual re-building after the early December stair incident. 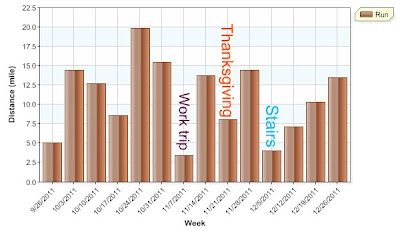 Otherwise, my mileage has still been influenced some by nausea. Incredible, I know. But up until just maybe 2-3 weeks ago I was still having awful nausea some days. That's a solid 10-12 weeks later than I should have been having nausea. I could eat, but felt less than great and ended up drinking Cherry Coke a lot of days to try to settle my stomach. Honestly, it may have partly been stress. Whatever it was, I think it's finally behind me.

On Pace
In my memory, my pace started to slow down in the middle of this past trimester. But, according to the ever-handy training log, not so much. Until about a month ago my pace was anywhere from 0-30 seconds per mile slower than normal. And what happened a month ago? That's right, the stair incident. So, maybe it's possible that my Saturday "long" run is just getting back to pace rather than being a mirage.

The 0-30 second slow-down isn't new to the second trimester, but it's been more consistent. In the first trimester it was about keeping my heart rate in check. This past trimester, it's been more about shortness of breath and knowing that if I push too hard I put too much pressure on my tailbone.

More recently, I've had a few days where I just feel like a large moving object and for a few days I had shin splints. Shin splints?!? Seriously?? Where did that come from? I'm 100% ok with the slower moving days. Even though a slow pace still feels like all I've got, I'm still thrilled to be out doing it.

On Perception
I laugh every time I give someone the runner nod only to realize that they didn't see it because they were looking about 2 feet lower. Ha! But overall, I have to say, I get stared at a LOT less than I did when I was a pregnant running lady 4 years ago. Even my mother has stopped harassing me about it. And like I said on Monday, occasionally I even get some encouragement from strangers. Mostly people are really supportive.

On Logistics
I know, I know. Y'all know how much I've loved my maternity running tops. But a few other things have significantly improved my second trimester running. First, my Nathan Handheld. I haven't had to worry about whether the water fountains in my park will work on colder mornings, or when they will winterize the park. Also, I've noticed that I've had fewer headaches since I've been running with water rather than stopping every now and then when it was available.

I have no idea how running is going to change over the next couple of months. Some days are easier than others. I stopped running at 7 months with my first pregnancy, and hope to run longer than that this time around. Fingers crossed!
Posted by Joanna at 9:14 PM

LOL, eyes up here fellow! I'll cross my fingers for you too....

This is totally unrelated to your awesome post but I wanted to say, yes, the tennis ball makes a huge difference. The muscle is so deep I think it helps pinpoint it but once again, it HURTS! I know when I go for a massage the lady puts all her weight into targeting the muscle and getting it to relax.

I also add stretching all the surrounding muscles - do the typical pretzel stretch but add in hammies, hip flexors, and guads to keep it all loose. Surprising, my left side is tighter (as expected) but stronger when I do my balance work.

Keep up the good work with the mileage. I hope to be running as much as you when I'm that pregnant.

I think that you will run until the moment of the birth.
You are a myth!!!!

I think you are doing great with your mileage. Keep it up and I hope the nausea isn't too bad for you!