Did you mean pregnant chicken?

Since I couldn't tell you I was running with a baby on board for almost my entire first trimester, I decided to do a My First Tri{mester} wrap-up post to bring you up to speed on what pregnant running has been like. Mostly it's been lovely. But life has changed, some days more dramatically than others.

On the Reduction in Miles
My bloggy friend Jess said she was suspicious because I'd been blogging less about actual running, and she was onto something. The biggest change has been my reduction in miles, and that's been caused by a handful of things.

1. Inability to eat
Like my first pregnancy, I lost weight through the first trimester. When I'm not consuming enough calories to sustain my own body it's not only hard but probably just not smart to burn another 500 or 600 calories by running. And when I have eaten, it's been a lot of weird crap. About two weeks ago I texted my neighbor at 10:15pm on a Friday to go get fried chicken with me. And Mr. Joanna totally caught me doing this. 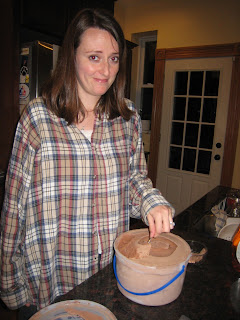 Yes, I've owned that shirt since 1994. No, I do not wear it outside my house.Yes, that's ice cream. Hey, at least I was putting in a bowl before eating it.

2. On the other hand
Inexplicably, running seemed to be the only thing that settled my stomach and allowed me to eat. After a morning run, I had about a 20 minute window where I could eat half a bowl of cereal, and the benefits seemed to go throughout the day. Yay running! So there was really a balancing act. But not of this variety.

3. Fatigue
Even this past weekend I fell asleep at 9:15 on Saturday night. I've fallen asleep while upright, working at my desk (ok, this only happened once, but still!). Fatigue has made it especially difficult to get up mornings before work to get that run in.

4. Distance
If you try to do your own web-MDing, you'll quickly find all sort of guidelines about what pregnant women should do. As I've said though, thankfully my doctor has cleared me for longer runs, and I am off and going!*

On the Logistics
1. Clothes
Right. So, I thought it was all so-far-so-good on this front, until I got home from my Monday morning run and realized that my pants had moved to the bottom of my bump leaving less than half an inch between the bottom of my shirt and the top of my pants when I was standing still. THANK GOODNESS for maternity running shirts. This is a huge blessing and recent revolution in running.

2. Hydration
Hydration is essential these days. This has meant drinking up before I head out and stopping about every mile for water along the way. Mr. Joanna is considering installing a revolving door on the bathroom for me, so I think I'm doing just fine on the hydration front.

3. Pace
My pace has been a bit slower than usual. Largely this was an effort to keep my heart rate down, and sometimes some pregnancy-related aches and pains and every now and then some very heavy legs. Pace seems to be getting easier as I move into the second trimester. I'm not gonna lie--it's a blast to chick people while pregnant. BTW, if you Google Image search "pregnant chicking" you'll find some super bizarre crap ("did you mean pregnant chicken?"). The, um, most creative of which has to be this. You've been warned.

Do you have questions I haven't covered? Anything you're just dying to know?

* again, do NOT take this blog as medical advice. What I can do is specific to my personal medical history and fitness.
Posted by Joanna at 6:15 PM

Sounds like you have been able to make it work for you - stay healthy!

This whole post just cracked me up. Luv ya!
Oh, and be careful. Hearing about the guy who collapsed at Chicago scares the heck out of me for you.

You are wise, you know what you have to do with a baby on board. I am sure you will run until the ... 9th month!

You're pregnant...you can totally eat the ice cream out of the bucket and not be judged:)