Mondays in Love: Checking Off Another State

Last week I was traveling for work. While work travel can be exhausting, I love that it lets me see people I only see a time or two a year, explore places I would likely not otherwise check out, and rack up more states I can say I've run in. When I returned from this trip I decided to make a map to officially start keeping track, because, why not? (14, for those of you wondering--13 shown and Alaska, which I left off the map for simplicity's sake) And, I've run 7 of these 14 in the past year. Someday this whole map will be purple. <3 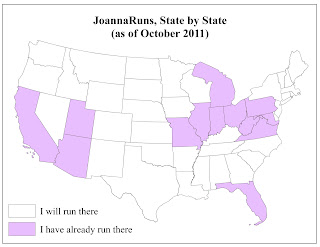 The run in Utah was beautiful and kind of humbling. Before I headed out, one of my colleagues told me the route he'd run the day before, so I decided to try it. He said it was uphill the whole way, but I imagined hills like I run here. You know, rolling? Hahaha--yeah, not quite! I covered over 750 feet gain in under a mile. And, Salt Lake City sits at about 4300 feet to begin with. I was huffing and puffing and even walked a little bit of it. I decided to turn around and run back down into the valley and finish my run on the city streets. Before turning around I ran past the state capital and got a panoramic view of the city below. 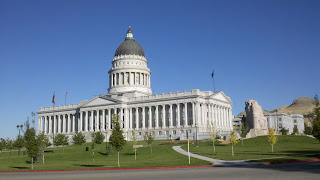 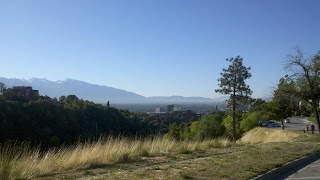 Back in the city I ran back through the gate (not sure what else to call it) and back into the main part of the city. 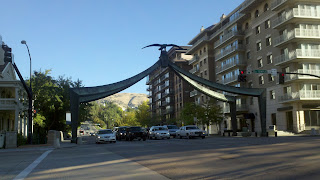 I wound around to Pioneer Park, which is about a city block in size. This was to be my turn-around point before heading back to the hotel. It took me a minute to figure out if people were living in the park (a local had told me this happens) or whether it was an organized protest. The tent village turned out to be part of the Occupy Wall Street movement that's going on. Later that day I saw them out marching. 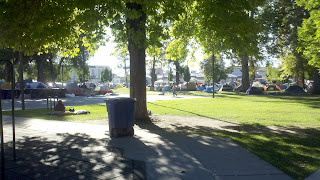 All told the run was a little over 4.5 miles and covered about 1800 feet in elevation gain, and I was feeling it even this morning. I'm always happy for a run that pushes me in ways I'm not used to. And, of course, lets me check off another state!

What states are you dying to run? Is hitting them all on your bucket list?
Posted by Joanna at 9:00 AM

that's super cool J! i want to run in more too. i'll have to see what i've got thus far. i love the map!

Wow, that looks beautiful! Love that you are on a mission to run in every state. Are the provinces next? ;)