On Monday I decided it was too nice out to run on a treadmill, so I tried a new course--about 2.4 miles from my office to downtown, turnaround and head back. It's a hilly 4.7 mile loop, with portions of shade and only a few intersections that really require you to stop. I liked it so much that I decided to repeat it this morning, but with more effort on doing it faster (hills! tempo! yeah!). So there I was, gliding along at that coveted "comfortably fast" pace (averaged 9:03/mi), enjoying the cool morning air, charging up hills and racing back down. And then, out of freaking nowhere... 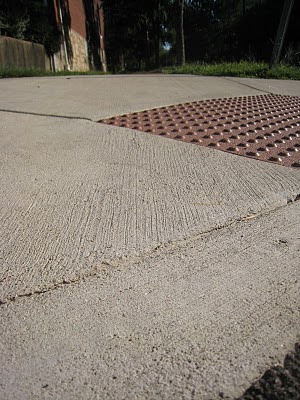 BAM! I was face down on the sidewalk. I totally bit it on some uneven pavement.
So there I was, processing what had just happened and slowly starting to peel myself back up off the sidewalk. Checking to make sure all my body parts were still attached. Making sure nothing was bleeding too badly. Dusting off some of the dirt I acquired. Standing all the way up and assessing my ability to run back to the office. I decided I was in pretty good shape, so I picked myself up and continued on. I'm not going to lie. I wish I could have been all gangster and hauled my sorry carcass back at the same fab pace I'd been keeping. Yeah, not so much!
I'm not sure whether it's a sign of the times or a blessing that no one asked if I was ok. The only thing really damaged was my dignity. And my wedding ring! Apparently I hit the ground hard enough to scratch platinum. You're impressed that I bit it that hard. You know you are.
In other news, I found a local running store that carries my not-ungirly-at-all size 10/2A Brooks Adrenalines. They had to have them transferred from one of their locations out in the 'burbs. They should be in tomorrow or Friday. I'm excited about new shoes (500 miles and counting on the current pair...), but more about having a good excuse to go scout out a local running store. Nerdy running excitement? Maybe. And it feels great.
424.9 + 4.7 + 4.7 = 434.4 miles
Posted by Joanna at 9:34 PM

Nothing wrong with nerdy running excitement! Glad you're ok after you bit it! Stupid uneven sidewalks!

aww man. i cringe for you, it must be painful to have a bruised hand :-( I am impressed however, that you went back to the spot to take a picture!!

Oh, sorry to disappoint--that picture is a sidewalk down the street from my house. Not the one I tripped on at all.

I also awoke this morning to discover that I had a bruise on my left hip as well. Battle scars. :)

Welcome to the "falling club": I am a recordman! Sorry for your incident. However it is always nice not to run on the "dreadmill".

i'm gonna go ahead and say you earned "gangster" for finishing your run. ;)