I have zero clues how it's July already, but alas. Summer, slow down! (said every academic ever). Welcome to the June recap.

Yeah, guys, June was not like any month in recent history. Even the summary stats show that:
Total miles: 50. Fifty. I don't want to talk about it, but we're going to.

Yoga classes: 3. Still with the hour-long format and loving it.


In early June I continued to experience pain around my left hip. I had visited my sports massage lady in late May, and she'd referred me to a "holistic PT" near here, swearing he was some kind of miracle worker. I scheduled an appointment for June 13.

The appointment took about half an hour. Since he doesn't take insurance this turned out to be a very expensive half hour in which I learned that my pelvis has been out of joint for almost a year. My what? Did what?! The PT took a little too much interest in listing the ways this might have happened and the ways I might avoid it. Some were exactly what you're thinking. One was "did you have big babies?" To which I replied "Yes, but the youngest is six. I've run 5000 miles or so since then. He didn't do this." And I called him an evil son of a bitch when he told me not to run for 2 weeks.

Sidebar--I cannot take seriously anyone who sells a book they wrote about the power of your primal instinct against pain. If writing such a book doesn't already appear in the ways to ruin a date with an academic, it should. So it's possible I didn't entirely believe the running embargo was necessary.

He also told me to avoid anything like lunging or walking on uneven surfaces. I responded by promptly going hiking with my friend Tina. 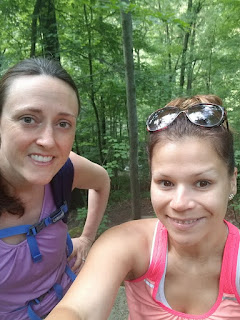 And then rock climbing in West Virginia for 3 days, which was mind-bendingly amazing, followed by hiking up Spruce Knob. The WV trip was among the best weeks of my life. Absolute magic. 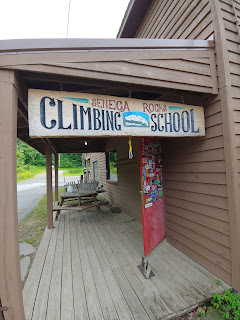 So, I didn't exactly follow the PT's orders, but I also wasn't about to change up my trip, and I'm not sure how much I believed him. Since this happened I've learned that it's fairly common for runners AND yogis to pop out of joint. I've now heard one story of a runner getting adjusted in the middle of an ultra trail race, and another of being casually put back in joint on a massage table at a race finish line.

I tell you this to say two things:
In happier running news though, a bunch.

Then, Rachel and I kept our June streak alive. Before the running embargo, my Dad and I planned a very last minute trip to St. Louis for the opera festival. Happily, this was just before Rachel's marathon (WHERE SHE BQ'ED LIKE A BOSS) and I got a few miles in with her. While opera isn't really my jam, the trip was delightful. I got to see dear friends, eat good food, make some memories with my Dad, and soak in a city I so love.
Soon after, my friend Katie had her baby. We found her walking at the end of our long run today (July 1), and I got to meet the baby. More on that next month, but can I just say how impressed I am that Katie is up and walking two miles already?! Total badass.

Then just a few days ago, I ran my third ever trail race, which was a mud bath of epic proportions, and a lot of fun. I signed up for a 3-race series with these beauties and a few other mommas who missed the picture. There are after pictures somewhere, but I prefer to just tell you I had to throw my shoes in the washer.
Here at the start of July, I still can't run long miles, but when the pain comes, it comes on distinctly differently than before. I'm hoping this means I'm still in joint and my muscles are just adjusting. I'll be going to a less quacky PT in the coming weeks, keeping my fingers crossed, and really working on beefing up my primal instincts. Stay tuned.
Posted by Joanna at 8:18 PM