Week 1 Training:I'm starving, and other headlines

Monday was a gentle re-introduction to training, 5.5 EZ miles. No biggie.

Tuesday: you've heard me say this so many times it's ridiculous, but...this is the day for XT and...I didn't do it. The issue is that I don't have a routine. I'm not signed up for a class at work, and I haven't been to any of the many yoga studios near my house. Goal for the upcoming week: find a Groupon or intro special for one of them, sign up, and get going!

Wednesday: Speed work, for the first time in something like 6 months (six months?!?). It....was...brutal. I don't think the rest of the world calls these runs progression-regression runs, but that's what we called them in high school and the name has stuck with me. What do you call them? Where you do intervals that increase in distance up to a point, then you do the whole thing in reverse? Anyway, to prevent myself from panicking over distances and paces, I wrote it down and put it in my pocket to peek at during recoveries. (yes, I realize the interval pace is constant) 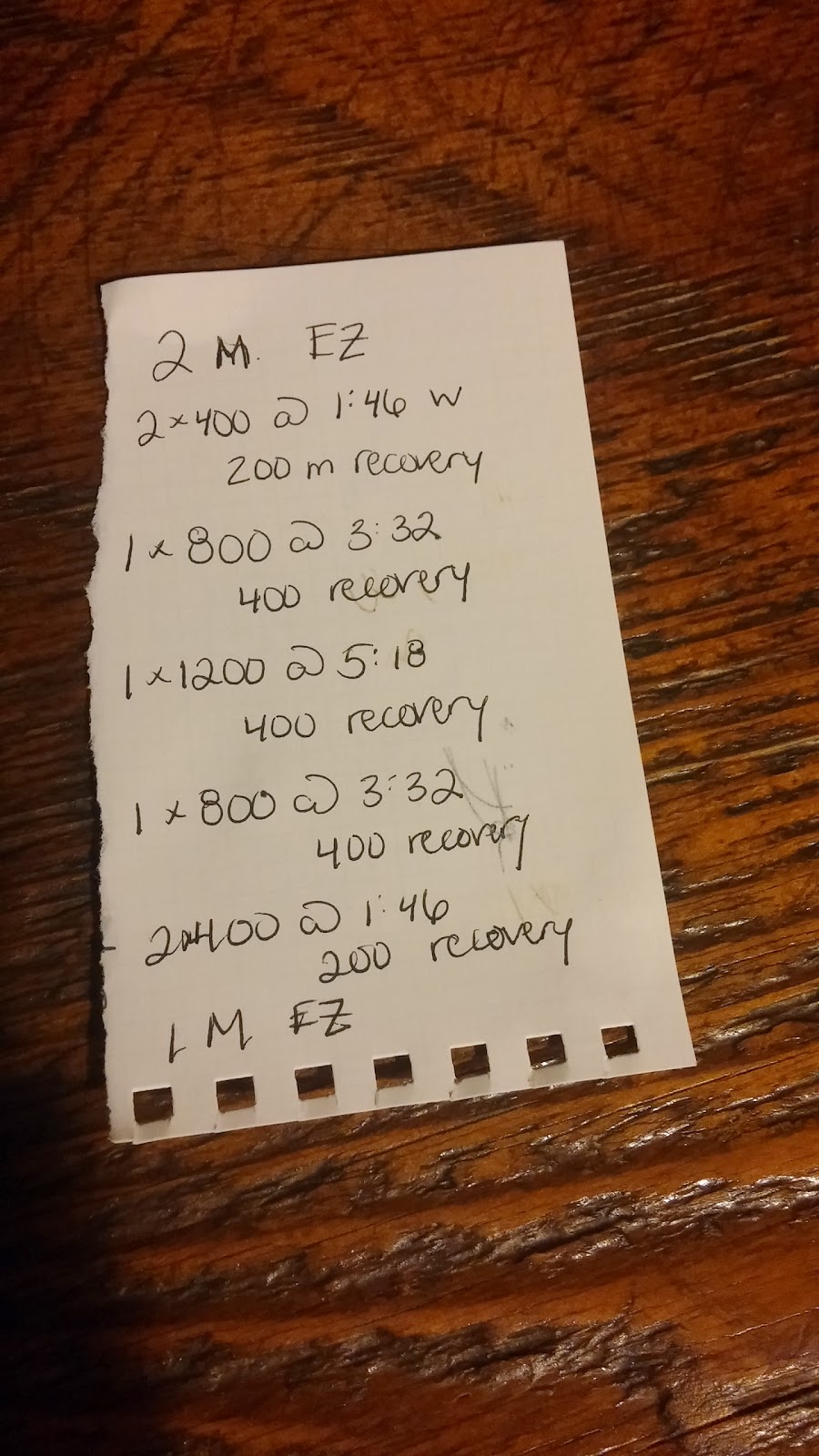 Other than that second 800 I wasn't crazy far off. The whole time I was doing it I kept telling myself that I shouldn't expect to hit my paces in Week 1 after so long. Yet, I pushed too hard, and ended up with a pounding heading for most of the day. Like, bad enough that I couldn't eat. I always tell other people not to jump in too fast, why didn't I take my own advice?? Lesson (re)learned. Plus, as I get stronger week to week, these paces won't seem so insane.

Friday: 5 miles EZ. Talk about a gorgeous run. The moon was setting to the west just as the sun was rising to the east. All those colors. Caught between the sleeping and waking worlds. It was one of those moments where you feel sorry for people who don't run, and/or people who aren't morning people.

Saturday: Long run! And, a chance to try out a new pair of tights I bought last weekend at Salt Lake Running Company, which is my go-to store around here for all things running. I'd been in the market for a while for a pair of non-thermal, full-length tights, to span that temperature range between about 25 and 38. I'd had a hard time deciding. Several pairs at Athleta looked attractive, but were super expensive. The sales person at the running store was really helpful. She showed me several options, some in winter clearance and some not, and helped me pick a pair made by Swoob. I'd never heard of the company. Turns out it's a Utah-based company. After reading their site a bit, I love their mission:

"The idea for the company came while climbing in Utah's Wasatch Mountains. We noticed most women would stow things in their bra while climbing. After talking to other active gals we found many use their sports bras as a pocket to store anything from energy pouches to keys and phones.  Realizing an opportunity Swoob was born around a mission to support the active lifestyle of females."

The sales girl said she loved their products, and at $34 on sale, I was intrigued. Plus, the fabric felt nice, and I immediately loved the very wide waist band, which I've found drastically improves comfort. I couldn't resist. (Product can be found here on a much thinner model who is either very blessed or has had a boob job)
Admittedly, today was a touch too warm for this get-up, but not ridiculously so. Even in slightly-too-warm-weather, these tights performed very well. Things I love about them:


I could ding them for not having a zippered pocket, although to be honest, I usually run with my Nathan hand held water bottle, which has a zippered pocket, so this isn't a huge deal. I might care more if I were doing a 5k in them and had to carry anything valuable. Also, they do not have reflective qualities, and as I run a lot in the dark, this is the only real con I have for these tights.

Today's run itself was 8 miles of lovely. It's no secret that I live for long runs. The second half was better than the first--it just took me a little extra time to settle in today. I took it slower than I have in a while, which was nice.

Wrapping up the week, I'm struck by how immediately starving I am when re-entering training. Since early December, I've been working to very slowly lose some weight. I've lost about 7 pounds--go me! So I've been watching what I eat. I think the trick will be in telling my nutrition journal (which is an online tool) that I've increased my exercise time/distance, and that will signal it to increase my daily calorie allotment while keeping me on track. Stay tuned for updates on this. I've historically had a hard time losing weight while training, so we'll see how it goes.

I didn't know Swoob made anything besides bras, I will have to check them out, I love supporting small companies. I love the sea of toys by the way

Great week of training, I think we used to call them ladders in cross country, but I can't remember for sure.

A solid week of training despite it was the first.
All the best.