As promised last week, today's post is about Utah's most notorious challenge for runners (and lots of other people): inversions. In short, inversions happen when high pressure weather systems effectively create a lid over the Salt Lake valley, and that lid traps pollution in the valley. This phenomenon has always happened, but man-made pollution makes it much worse. During inversions, air quality ranges from yellow to orange to red, each with guidelines about activities that should be reduced by all residents (such as using wood-burning fireplaces or stoves), industry (smelting, for instance), and vulnerable populations (elderly, children, and anyone with chronic bronchial problems, who should all stay indoors).

The severity of the air quality problems during inversions leads to an interesting public conversation, and actions that are both surprising and encouraging given Utah's general political culture. For instance, something like 99% of Utahns say they are willing to change their behavior to improve air quality. That's incredible. Salt Lake City has the largest transit system in the US given its population size. Residents of the Salt Lake Valley have embraced the idea of center-based growth, whereby growth is encouraged to happen in nodes that will increase overall density, thus reducing both pollution and water use. Those conversations are inspiring things to be part of. There's a pretty cute video about the inversions here.

To show you an example, I took a picture from the same intersection at about the same time on a day with poor air quality and on a day with good (green) air quality. Look at the difference in visability. That is pollution. 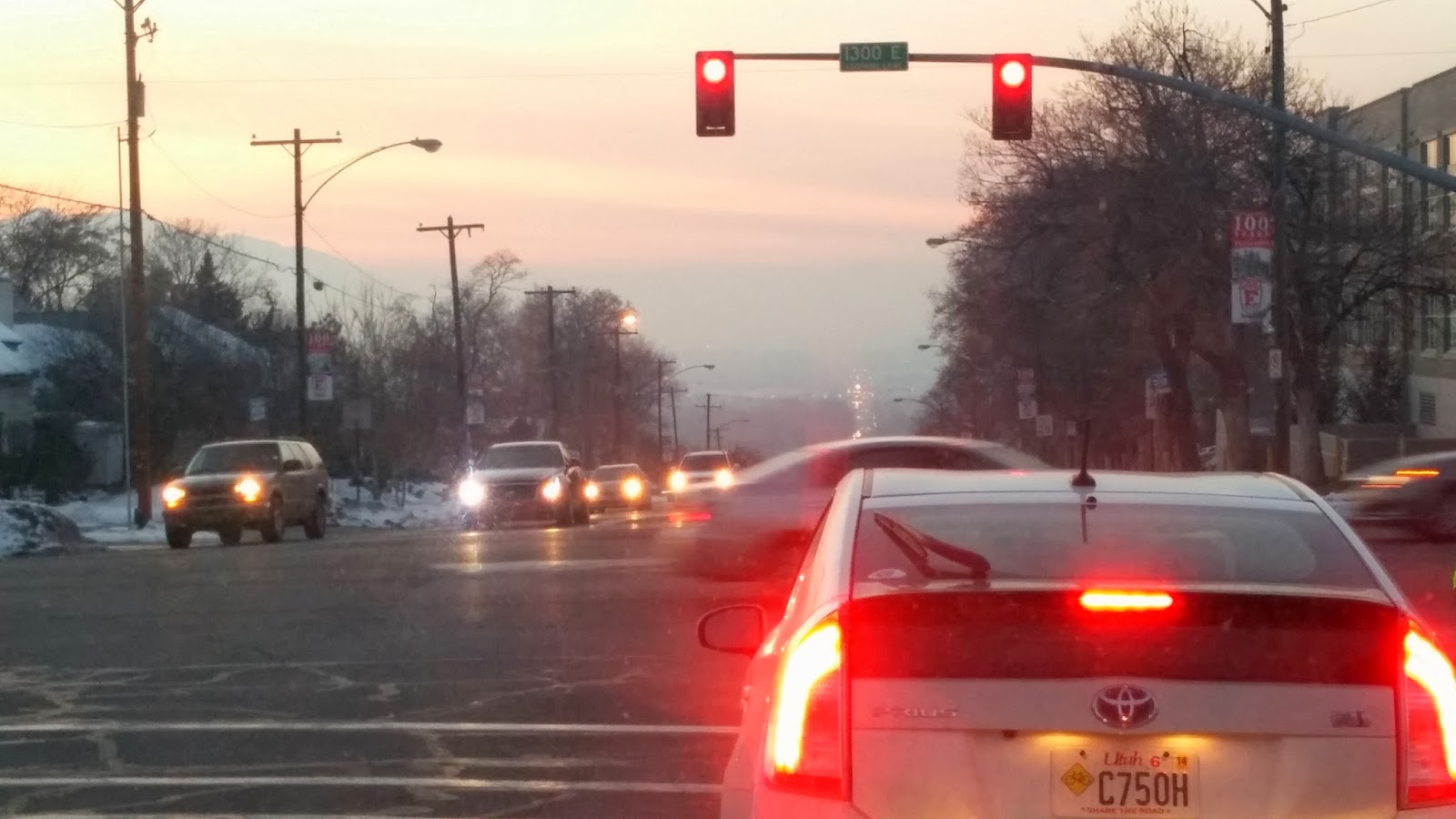 On a bad air quality day. They call this "hazy". I call it gross.

Notice how you can see the contours of the mountains, the ridge line straight ahead, and much better definition of the road straight ahead. (Yes Mom, I was at a complete stop when I took this picture--there was no one behind me)

So what does orange and red air quality mean for runners? Mostly it means making sure you get those runs in early in the morning. The air quality is dramatically better in the very early morning than after the sun comes up. As much as I hate the inversion, I can live with this. I run very early anyway. Occasionally, either because you can't do an early morning or, on its worst day, the air quality is questionable even then, the treadmill becomes necessary. I only had to head indoors once this winter due to air quality.

The inversion also means that biking for XT is a less ideal option. A bike commute would require biking home later in the day, and the errands I usually run by bike generally aren't things I can do before 7am. Consequently, my bike has been tethered since December.

There you have it, the scoop on inversions. Up next: altitude. Stay tuned!
Posted by Joanna at 8:00 AM

Thankfully we don't get those here, I hear about them on the news, good thing so many people are willing to work to try to improve it. Those photos are so different!

I understand very well what you mean. I live in a polluted city and I work in 2 important european environmental committees.