Mondays (work with me) in Love: My Love

A few posts back some of you commented on the incredible invention that is my husband's invisible bike. Did he have invisible friends to go with it? Was he doing the happy bike dance? People who knew him in college might have asked if he got an invisible bike to go with his albino alter-ego. 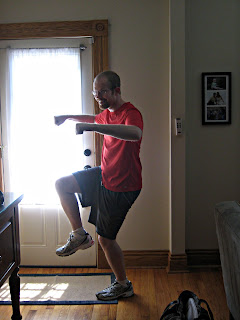 Sidebar: Seriously, the man is pale. And blond. And pale. Back in the days when people used AIM his user name involved the word Albino. Really.

While an invisible bike would have been a really good trick, he did in fact get the traditional visible kind. I think he was just a little sheepish about sharing it with you. 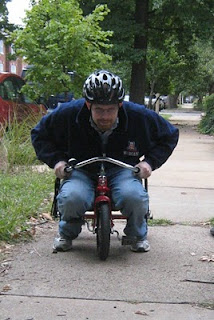 (yes, that is really my husband. We're a bunch of hams over here, and I love it)

His real bike is the Giant Escape (lol, he bought a giant escape). He's been riding through the park and neighborhood and has even used it to commute to work a few times. I love love love that he's doing this. It makes both of us smile. That's what I'm in love with this Monday (like I said, work with me)--my hubby's new bike habit.

Think I'll catch the bike bug one day? Have you??
Posted by Joanna at 8:44 PM

Love that you goof off and laugh together!

AWESOME that he is loving the new ride. There is something so FREEING about riding a bike.

Thanks for the throwback tag - struggling to catch up on things but I will try to play along!!

Between the 2 bikes I think that the invisible one is more comfortable.
Nice pics.