Ok, people. I've received some questions about "popping the deuces." There was a trace of concern. I feel you should receive an urban education on this topic. Per the Urban Dictionary:
"Poppin' Deuces--to peace out, to throw the peace sign and leave."
So no, my husband was not doing anything questionable. The man is a peace loving albino!
(note: no, he is not actually an albino. but...close enough) 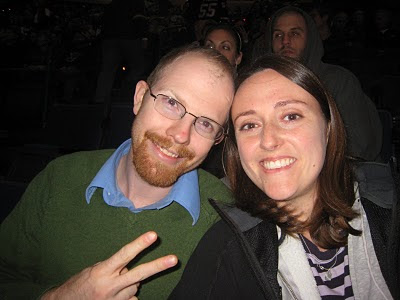 Ok, moving on. Today was my first ever Turkey Trot! It was called the Gobble Gobble 5k. Seriously. Gobble gobble, a recap.
The race website (as well as the active.com registration page) was almost entirely devoid of details. Pesky things like start time and location. I finally found an address last night, looked it up, wrote out directions, laid out my clothes, and went to bed. This morning I was up, dressed, and out on time and headed to the race.
Except I got there and found an empty parking lot. Gaaaaaah! I called Mr. Joanna, who was still sleeping and couldn't hear his phone. I called a co-worker who I knew would be awake, but didn't get an answer. I finally called my mom, only because I knew they have a land line phone and it would wake her up.
Now, let me tell you how seriously I had to consider this decision. Rule #1 of my family is never under any circumstance take driving directions from my mom. When my sister-in-law joined the family, it was practically the first thing I told her. My mother's directions have never, and this is not an exaggeration, never gotten me to my intended destination. And working with her to get directions while you are in motion is another whole debacle. So it was with great consternation that I called her.
I have to hand it to her, she came through for me today. Not only was she totally gracious about the fact that I called her at o'dark-thirty on a holiday, and the fact that she knows how I feel about her navigation skills, she got me from point A (aka, lost) to point B (start line) very smoothly. So here it is Mom, in writing for all the world to see: GOOOOOO Pepper!!! Great job on the directions and THANK YOU!!!
So I finally got to the race, picked up my packet, jogged around a little bit to warm up, looked (unsuccessfully) for my runner-girl co-worker, and lined up. Now, usually at races, I'm a mid-packer. No use in being all cocky and lining up in front and having everyone have to run around me. I try to line up in the proper starting corral. But at Gobble Gobble there weren't corrals. It was a 5k, after all. And the field is startlingly different than the field at any large half- or full marathon. People in sweats...in the rain. Mothers announcing that they have snacks just in case anyone gets hungry during the race. You get the picture. So I moved up a little farther than I normally would. I still spent the better part of the first half mile dodging around people and having to slow down to get around them, but it thinned out and I took off and I smiled ear to ear.
It had been 12 years since I last ran a 5k. This felt so different than I remembered it. Three point one felt like a long way to run in high school cross country. Today it felt like, run hard, run fast, it's so short! I put my head down and just kept my legs moving under me. It was over before I knew it. I finished over two minutes faster than my high school PR. Woot!! Today I finished in 25:19. And I had a great time doing it. And I know I could do it faster. Now I can't wait for more 5ks!
I learned a lot today. Nerdy girl list time:
I hope everyone had a great Thanksgiving today! Some of you have had great posts about the holiday. I am incredibly thankful for my family, the best friends a girl could ask for (even if they are all far away), a job I love, a warm home, and the ability to run my heart out!
Posted by Joanna at 8:14 PM

Great job on the PR!

Awesome job girl!!! I am going to have to get my butt in shape to at least try and stay close.

Congrats on the new PR, the under 5'/Km is very close!
In my opinion the 5K is a difficult race because you have to push by the first moment.
About the Garmin: I use it only during the long distance races to understand where I am (I mean the mileage) and to take under control the pace.