I'll just say it without introduction--I love to bake. I love to watch baked goods come together in my kitchen, knowing that lesser products are bought much more expensively every day at grocery store bakeries. I love the smell of freshly baked bread. I love knowing what's in my bread. I love sweets (hence the title of this post). I love it all. I've tried a few new recipes recently and have enjoyed them so much I decided to share.
Up first is cinnamon raisin swirl bread, from Betty Crocker's Bridal Edition Cookbook. I initially made it at my husband's request. After I saw the first loaf though, I fell for it. Here's a picture of the current loaf. 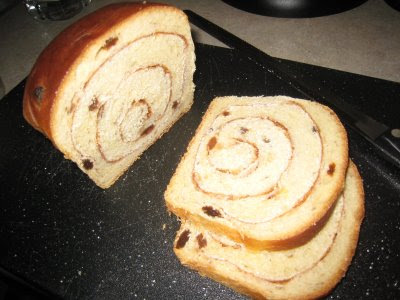 One of my best friends and I both had birthdays in the last two weeks. We always celebrate together, but she was out of town visiting her family this year, so we postponed until tonight. To celebrate, we and our husbands decided to go out for dinner then have a homemade dessert from the cookbook she gave me for Christmas. We chose "Vanilla bean with white chocolate buttercream." I learned SO much about cake baking from this recipe. It calls for a vanilla bean, which I had never used. The recipe calls for three 8" layers, but no one owns 8" cake pans, so I adjusted the recipe to use 9" pans. Also, the icing follows a recipe with several elements I'd never seen before. It took three trips to the store and several hours of baking (some with assistance from my husband) to get it right. In short, it took some commitment. Like most things, it will be much easier the second time around. My husband insists that I tell you how good the cake was, to clarify that it was well worth the effort. And well...I was pleased. So, here is the 2009 birthday cake: 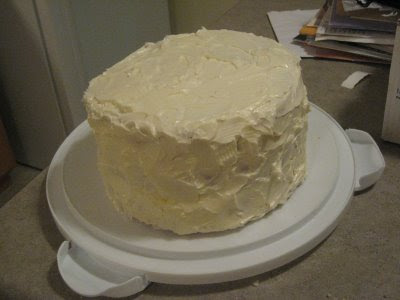 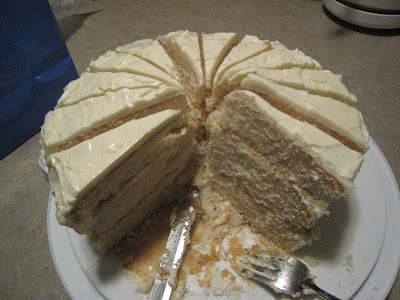 Looks yummy...AND I will have to look up the bread recipe. I have that cookbook and LOVE cinnamon raisin bread.