After the Canton Marathon I dialed it down a notch in May. Ok, a lot. I cut miles by two-thirds and rested. When June rolled around I was ready to get back out there. I had some help getting it done.

Following in our tradition of The Adventures of Shannon and Joanna*, the first Saturday in June I plotted a route into the city where I met Shannon and we ran a round trip to Lake Erie and back. It brings me more than a little joy that I can run to a lakefront from my house. That's something I've never been able to say. And we had a good time doing it. AND she drove me home, so I didn't have to run back up the big hill.

A few days later my long-time and interstate running buddy Rachel and her incredibly fast friend Barb came to visit while vacationing. Like we do, we ran. June wouldn't be complete without it. I can't tell you enough how much I enjoyed this. We've known each other for almost 6 years in which a lot has happened for us both. We have history. We talk deeply. I savor our visits. 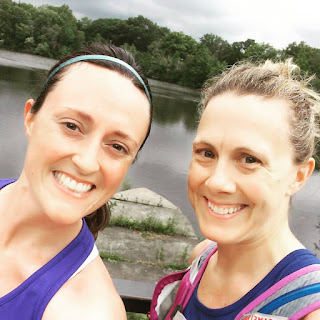 I've talked before about MRTT, which is a national, free running group for women, that has local chapters. It's been among my favorite parts of moving to Cleveland. Women post their plans and look for others to run with. Through this, I found a Sunday early morning running group I've done three longer runs with now. Each week has been a slightly different group of women. I've really enjoyed getting to know them. 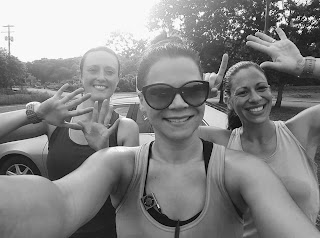 Later in the month I started having trouble with my left quad/knee/foot, which isn't a new thing. While I was running hills in the winter and spring this was less of a problem, but the moment I stop doing things that strengthen my hips and glutes, it's right back. Step 1: yoga. At first because Shannon invited me to a free yoga event downtown for International Yoga Day. I enjoyed this so, so much. Even if I did get bird poop on my elbow. I consoled myself with lunch and beer afterward.
This past week I finally went to yoga at a studio near me. It was hard. I needed the ass kicking. I will be returning.

The thing about yoga, I don't enjoy it. I'm sweating and standing still. I like both but not at the same time. I'm a runner who loves to go fast. And I like to get stuff done--like stuff I can check off a list. That's not yoga. The whole inner world of yoga is something I have to work at embracing. At the same time, I also don't hate yoga. Hot yoga, different story. No love lost there. Anyway, yoga is a thing I do to keep running from hurting me. And I need to keep doing it.

* The Adventures of Shannon and Joanna, which I adore, consist mostly of Shannon graciously showing me all the fun things Northeast Ohio has to offer, and me getting her lost, caught in ice storms, or agreeing while she's drunk to run really long distances the following day. Gradually I'm finding things to invite her to.
Posted by Joanna at 10:18 AM