Monday
Up and at 'em! The first mile was sloooow and stiff, but I got going. After the turn-around I saw a woman I know from work. I was surprised to see her because she didn't appear to be exercising or dog walking. I stopped and said good morning and she shared what she was doing.

I learned that the Jewish month starts with the new moon. She coordinates a group to get together each new moon to mark the occasion, I think always outdoors. I'm not clear what's involved in the get-together or why it's outdoors, but I enjoyed learning about that activity in her life.

Tuesday
This one will enter the history books, my friends.

I slept badly, worried I would miss my 5:45 alarm. I wanted to get up and out so my 8 miles wouldn't make me late to work. I got up, dressed, happily a few minutes faster than usual. But then, then: no keys. Not anywhere. Not on the kitchen counter. Or the key dish. Or my purse. No keys. I found the spare key to my husband's car and piled into that. Started the engine. Gas light was on, and I'm not driving even near a gas station. So, shit. Back inside for keys. And then I remembered: Brendan drove us home last night.

[Sidebar: My husband and I had a very rare date night last night. We went out to fancy dinner and a movie. There were two women and a man sitting directly behind us. One of the women in particular talked all the way through the previews, rebuffing an angry old man who yelled at her to "shut up!" I had hoped she would stop when the movie began, but she didn't. I calmly asked if she intended to talk through the whole movie. She angrily got up and moved herself and her two friends across the theater, which was fine with me. After the movie as we were leaving she starts again, "Now I can talk! People acting like you can't talk in a movie theater!" They had four PSAs before the movie about it. We had a good laugh about it, once I was sure she wasn't going to try to beat me up.]

If Brendan drove us home my keys were likely in whatever pants or jacket he wore. I checked the jacket--no dice. The pants? I headed upstairs, back to our bedroom, and there they were. I was finally on my way.

I improved on last week's hill workout, making it to the bottom twice, with a small loop added to the first out and back that added a bit more elevation gain and loss. I got 434 feet in gain and again in loss. It felt good. What I did not improve on was mastering the parking situation. I parked in a small lot then saw the signs prohibiting parking before 8am, so I had to move. Between that and the key situation, I wrapped up this run about 20 minutes later than I really should have.

As I got back in my car and was reaching for my seat belt, a black SUV pulled to the shoulder where I was parked, facing me, which I thought was odd. Then I realized it was my friend Shannon. Figuring she was there to run and just happened to see me, I got out to say hi. AND SHE HAD PASTRIES. FOR ME. Paczki, specifically, which is a Polish donut-esque pastry enjoyed on Mardi Gras. 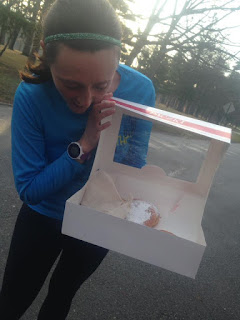 How magically unicorn-jumping awesome is this?!? You finish an 8 mile hill workout and your BRF appears out of nowhere with pastry?? It was magic. And they were delicious. I took them home and my family gobbled them up. Gluttonous. Happy.

Thursday
At a 10am meeting:
Me: I had a mile time trail on my training schedule today.
Colleague: You can do that while sick?
Me: Apparently not.

My mile time trial was a full 40 seconds slower than I expected. I can only blame about 5 of those seconds on patches of ice. I'm hoping I can blame the rest on sinus pressure, noisy coughing, and a runny nose.

Friday
Today I learned what the term "snow squall" means. 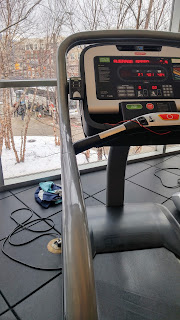 Friday night Laurie and I were texting, making plans for our Saturday long run. She was doing 18 or 20 to my 14 for my drop-back week. We were planning when and how she'd get her extra miles and when I would meet her. Somewhere in the middle of that planning, she figured out what her recent pain was: a femoral stress fracture. And with that, her marathon training ended. Our long runs together ended--at least for several months.

My instinct was to hope she was wrong. But if there's one thing I know about Laurie, when she says she's injured, she's injured. She is strong--strong-willed, strong-minded, strong-bodied. And so I knew there was no hoping she was wrong. And, I'm heartbroken. For her, and for our runs together.


Saturday
Left to my own devices, as I've long said I would, I did not get up early to run. I slept. Then I played with my kids. And mid-afternoon, only then did I lace up and head out. Just 14 miles ("just 14 miles"?? Who says that?!). I didn't really mean to take it fast, but I was enjoying the cold day and felt good. So I ran an average moving pace of 8:48. The best part--heading down a paved trail and hearing birds singing all around me. Spring is on the way.

With this week finished, I'm half way through training for this marathon, and prepared to switch from building endurance to building speed. No more hill workouts. Lots of pace runs, tempo runs, and a little actual speed work in the coming weeks. The next 6 weeks are the hardest of this 16 week training cycle. I think I'm ready.
Posted by Joanna at 9:24 PM