I'm a little late posting it, but here's the run-down from Week 4.

Monday
Short version:
Longer version: I tried. I laced up. The roads had been plowed but not salted and didn't look too bad. I hit go on the Garmin. I tried. And for 0.11 miles I slipped and slid and probably cussed just a little. So I turned around and walked all 8 houses back to my front door and called it a day. I had a snowball fight and built a snowman and made snow angels and drank hot chocolate with my kids. My heart was full. My Garmin, not so much. 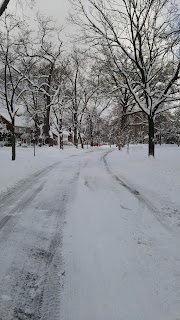 Tuesday
Gym day for hill repeats. In the few weeks I've been doing these I've gotten on to using my employer's indoor walkway system that connects buildings. Several northern cities have these--Minneapolis' might be the best known. It's a whole world that avoids winter weather. There are coffee stands and even full restaurants set up in the corridors. And you can just peek outside at the winter while "crossing" streets. 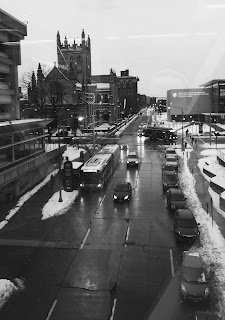 I repeated the same workout I'd done the past two weeks, but increased the incline on most of my "rest" intervals. I got to 607 feet in vertical gain over 5 miles. Like last week, it felt easier than the week before. I can feel myself get stronger week to week on this one. Love that.

Wednesday
My schedule called for a one mile time trial. I did one a few years ago and have been looking forward to doing it again. But....the snow. My indoor track option is 10.5 laps to a mile, which certainly isn't optimal. I went and checked the roads Tuesday night and decided they looked reasonable, but we weren't sure what would happen overnight. So, Shannon and I met at 6am at a nearby school and decided we'd try the roads and hope for the best. 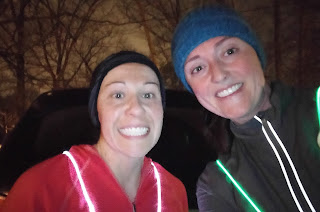 We did one mile of warm-up in which we learned the roads were not in fact clear. They looked clear! They looked fine. They had a thin layer of ice, not everywhere, and not visible. We ran cautiously.

We ran fast where we could for the "time trial" and turned in a 7:30 mile. That certainly is not the fastest mile either of us can turn in, but for the conditions we had, I think it was the best we could ask for.

One mile cool down, and headed home for a hot shower and breakfast. Bonus: since the schedule called only for the time trial, I made up 2 of the 4 miles I missed on Monday.

Thursday
Thursday is my super long day at work, so I decided to sleep in a bit and hit the gym at work late afternoon. In case you forgot: four easy miles on a treadmill is super boring. Also, I accidentally dressed like a blueberry. 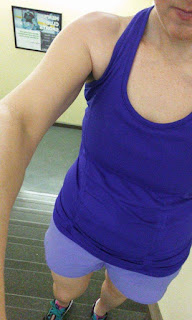 Friday
It was like running in a snow globe about 15 seconds after you shake it--snow gently, lightly swirling and falling past me. Beautiful.

Saturday
My cut-back week long run was 10 miles. I met two of my MRTT ladies at the Towpath. Like we do, our conversation ventured into economic policy, this time around the Cold War. But we talked about all kinds of personal things too. I know them better for today. I love them better for today.