Marathon Training Week #1 is in the books!! This past week I was juggling a huge work deadline that had me working pretty long hours. Running was a great distraction from that. I think training is off to a solid start. Here's the weekly recap.

Monday
Easy 4 miles. I found myself holding an 8:45 pace and breathing a little heavy. It was nice to remind myself what the training plan calls "easy" and to slow down.


Tuesday
My Tuesday hill run was magical. I woke up at 5:20 to howling wind and snow-covered streets. I'd gone to bed past 11:30 the previous night--the project had turned me into a mad scientist. I had that I'm-tired-it's-early-vomit feeling. Really? I thought. We're doing this? I checked the weather. The icy rain/sleet combo was set to move in about 7:20. We'd be done and home by then. So I got dressed, backed my car out of the garage* and headed out.

* this is a big deal! One day while it was snowing last week, I said, f-it. This is the day I stop waiting for the garage to get cleaner while my car sits in the snow. I called a trash hauling company. I returned a ton of extra bathroom tile (that's another story), and I parked my car. I felt victorious. 2017: Making dreams come true.

Shannon had master-minded the route. We both arrived just after 6 and quickly found our way to the path we knew.....was there somewhere. It was dark and snowy, and for just a moment reminded me of walking across snowy fields with my friends when I was younger. We laughed at ourselves, trying to find the path, slipping off the side of it now and then. Sometimes we could feel the hard surface under our feet. Other times we were in calf deep snow. I wore ski socks. It was delightful. 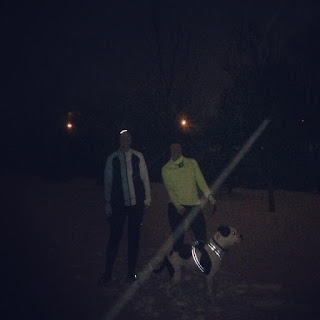 We ran the hilliest loops we knew. I'm having trouble getting my Garmin to tell me the total elevation (net) change. Whatever it was, it certainly checked the boxes: strengthened my lungs and legs. Running in snow is beautiful, and a workout. I'm so very thankful for a friend who planned the route and met me to do this.


Wednesday
Rested the crap out of Wednesday. Physically at least. Mentally, not so much. As I had been doing for many, many days, I kept working feverishly on the research project due by week's end.

Shockingly not sore after the snowy hill run.

Thursday
Four miles easy. I went mid-day, when something with my data was going very, very wrong and I could not wrap my head around why, what, or how to fix it. I spent the entire four miles reviewing what I'd done, trying to find errors, and trying to solve the problem. The fog hung low over the lake, and I wished I'd had my phone to take a picture. At run's end, I had only decided that at least one part--the major part--of what I'd done had to be correct. Eventually I figured it out. I was still up until 2am working on it, the deadline approaching quickly.

Friday
Another four miles easy. I ran again mid-day. Largely from stress and not sleeping enough for several consecutive days, I was also not eating enough; my stomach had turned on me. For perhaps the first time ever, I ate a Gu before 4 mile run simply because I could tell my blood sugar was low. The four miles was good for me. I just tried to shake some stress out. I finally submitted the paper at 11pm. My mind then frantically ticked through the laundry list of things that might have gone wrong that I might not have caught. I checked the weather, made sure clean running clothes were available, and went to bed, about 11:40.

Saturday
I was to meet my friend Laurie at 7:30 at a park about 25 minutes from my house. At 6:45 she texted me to let her know when I left my house. I saw it and replied....at 7:04am. When I woke up. It's extremely unlike me, but I'd slept through my alarm. In fact, I didn't even remember it going off. I texted her to start without me (she was going to do 3 after I left, so she just did them before) and I'd be there at 8. This would give me PLENTY of time. PLENTY.

I got within half a mile of the park and my GPS just lost it. It insisted I turn into the park at what was not an entrance, then when I used the main entrance, told me it was adding an extra 12 minutes to the trip. I'd been there twice before, but it's an easy place to get lost. So I turned around. I thought I must have missed the entrance. I went back and looked. I hadn't. So I turned around again and went back the way I was going the first time--the right way. And so with what should have been abundantly enough time, I was still 7 minutes late. So.freaking.embarrassing.

I parked and jumped out and we took off. I didn't have a GPS signal yet and didn't care. We ran 8 miles together and talked about all sorts of things, my favorite of which might have been labor and modern manufacturing, as this is an area we're both interested in.

So we ran 8 miles. Know how many I was supposed to run? 10. But I couldn't because my husband had somewhere to be and my catastrophic efforts at 7:30am meant I simply didn't have enough time to run 10 miles. I hung out and played with the kids and cleaned until Mr. Joanna got home, then headed back out for the last 2. I think it's harder, not easier, to run 10 miles this way, which sort of surprised me. You know, in case you ever wanted to make a long run harder, I found your solution.

Because she's an awesome running buddy, Laurie texted me encouraging me to make sure I got that last 2 done. I'd just come back in from it, and sent her this picture. 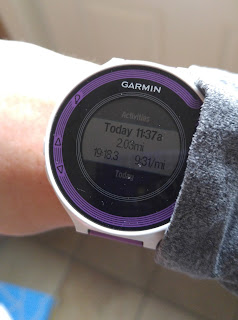 And then yeah, took a nap. I napped so hard.

Favorite run: I loved my long run, but the snowy hills were truly beautiful and funny
Posted by Joanna at 7:56 PM