Guys, I think I might be ready to start writing about running again. It's been a long hiatus, which vaguely started due to injury, then persisted because....life. I've been running pretty regularly for a few months and so, so much about life has changed in the past 8 months. It's a new world.

As to running, I crossed some milestones I thought about writing up, then didn't. First, there was the regular running. But this didn't seem noteworthy to me (note to self: it was!). Then, my first 100-mile month in who knows how long (actually, I do know: 16 months. Sixteen flipping months!). And finally, a race. And you know, races get us runners right in the feelings, and then I can't resist returning here to write about it. Welcome to the race report.

I'm gonna back up a bit from the race itself, back to about February or March when I told my friend Jodi I was moving to CLE. She immediately added me to a Facebook page for a free running group called MRTT (Moms Run This Town). I cannot begin to tell you how thankful I have been for this group. This is how I've met several of my new friends, who have graciously invited me on social outings and shown me the running paths around here. The group has over 1000 members, and we're everywhere. You go to a race, you're going to see MRTTers. A lot of us have magnets on our cars that say MRTT. Another MRTTer is going to see it eventually and flip it upside down--our way of saying hi. 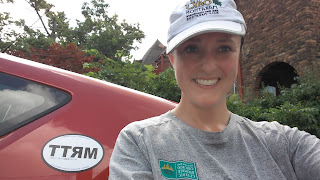 The MRTT, in fact, was how I learned about the Towpath Half in the first place.

The race was last Sunday. On Saturday I headed out to the Cuyahoga Valley National Park with my family, to the Boston Mills Ski Area, where the expo was being held. Two things on this: 1) I'm really happy to have skiing so convenient. 2) it's adorable. Their website boasts a 270" vertical drop, which, Utah would eat for breakfast. But honestly it's probably grade-appropriate for my family right now, so, winning.

I chatted with my friend Shannon (MRTT) at the expo, who I planned to race with. I snapped a few pictures near the finish line, ran around with the kiddos a bit, and got some ice cream from the general store. Beautiful day. 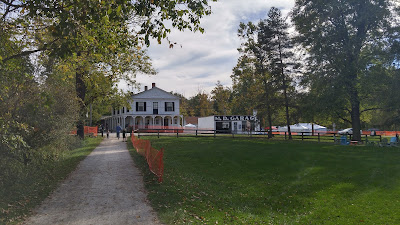 That night I couldn't decide what to wear. It would feel like 40 degrees at the start line, and warm up to around 50 or 52 by the end of the race. My long/short sleeve cut-off is somewhere between 50 and 55, but in a race I thought I might be warmer than usual. But that start would be cold. I couldn't decide. Finally I put out my trusty old Brooks skirt and a long-sleeved top. I stashed a short-sleeved shirt in my drop bag just in case, and called it a night.

Early Sunday morning I got up and went through the motions: get dressed, eat some toast and jam, double check my bag drop situation, plug in directions on the GPS, head out. Half an hour later I pulled into Brandywine Ski Area (near Boston Mills), parked, and went to find Shannon. We sat in my warm car as long as we dared before heading to the port-a-potty line. We waited too long. The line wasn't moving fast enough to make the start gun, but the guy on the bullhorn told us not to jump out of line about it. Enough people made use of the two-ply leaves in the woods, I got through the port-a-potty line just in time.  The sun came up--glorious--while we waited.

We crept up about as far as we could in the start area before the gun went off, trying to avoid getting caught behind walkers and slower runners. We still did some weaving in the first mile, but pretty minimal. Shannon ran right in front of me, leading us along the shoulder for a while, and only lowering a shoulder once.

We got to the Towpath itself about half a mile in, and settled in. Our plan was to start around 8:45 and drop to an 8:15 or 8:20 by the half-way point, then decide what the endgame would be. You learn a lot about people when you race with them. I learned, among other things, that Shannon goes out fast. I kept pulling her back, and together I think we made a good team.

Somewhere around here, we're running along when another runner looks at me and says, "Are you Joanna?" She was another MRTTer, and recognized me from a Facebook post. It definitely put a big smile on my face!

Usually when race directors tell you a course is flat, at some point you want to choke them. Not here. It is actually, for real, flat. There is the tiniest of a false-flat-down on the way out, and false-flat-up on the way back, but really truly tiny. And the course is beautiful.

At the half way point we talked strategy. She wanted to speed up. I didn't have faster, so I sent her on ahead. This is where, frankly, if I'd trained, I could have recouped some time. But I didn't really train. Yes, I ran 101 miles in September, but zero speed work, zero tempo runs, nothing. Just miles. And, that's fine. The whole point of this race was to get back out there!

I got a little down for a few miles, sort of hating life a little. Then at some point I thought, I'm supposed to be enjoying this. Look up! Look around! Take it in! Control your breathing and just run.

I had something happen at a water stop around this point that I'd never seen before. For a while, I'd been trying to pass a guy. For a while, oncoming runners prevented this. A time or two I thought maybe he just didn't see that I was trying to get around him. Then at a water stop, he took water while staying smack in the middle of the course, and audibly cussed when I squeezed my way around him. What the hell?!? Has anyone ever seen that??

Shannon was still in my sights at this point, and with just a 5k to go I was pretty head-down to get it done.

Coming in the home stretch I got into a race with a guy. We were plainly racing each other, and we were plainly both enjoying it. I honestly think he let me win. I don't care. He pushed me to go faster than I might have otherwise as we came into the last turn.

I'm pleased with this. It's a little faster than I ran Salt Lake in 2015, and I did it without any structured training. This race got me back to racing. 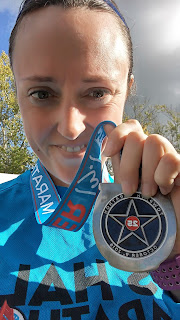 With such a gorgeous day, I decided to wander and hang out a bit. The beer tent, though very popular, just wasn't calling my name. At 10am. On a Sunday. After a race. (Seriously people, what am I missing about this? I just can't do it.) But there was live music, lots of people, and beautiful weather. I ended up running into 2 co-workers, then randomly meeting 2 MRTT ladies back at the parking lot.


All in all, this was a spectacular race weekend. Beautiful weather, mission get-back-to-racing accomplished, and got to do it with friends.
Posted by Joanna at 9:01 PM