I had the pleasure of attending a friend's wedding reception this weekend back in the Midwest. I'm going to get to the running part, hold on (!), but 2 things happened that I can't let pass unmentioned. First, I saw a friend's MIL in the Denver airport. Random, right?! Now, I've only ever met this MIL once, several years ago, so I wasn't 100% sure that's who I was looking at. I texted my friend, who confirmed the sighting, but by then the MIL had gotten away from me. Rascally, that one. Second, I landed in Indy, went to the car rental counter, and got all my paperwork taken care of. I walked to the parking spot where they said my car was waiting. I think the Thrifty Dollar rental people must have gotten the toilet paper companies to do their marketing, because this is what I got as my "economy sized" vehicle. Seriously?!?
Back to the running part: Like the good runner that I am, I planned to do my long run while there. Since I didn't know the area very well, I looked up various 13 routes near the hotel using MapMyRun. I found a few and saved one of them to my phone for Saturday. I mentioned this to my friend, who recommended the Monon Trail instead. Commercial/industrial suburbia or a paved rails-to-trails trail? Trail FTW, every time.

So I put Monon Trail, Carmel, IN in my phone's GPS. It tells me it's a 14 minute drive. Fine. I follow its instructions. Right up until it says "You've arrived at your destination", and I'm here.
Fairly certain that my phone is trying to get me lost or thrown in jail, I look around for signs for any trail nearby. Across the parking lot, I see a guy loading a bike onto the back of his car, so I lumber the ol' Xterra over there and sure enough, there's the trail entrance. I asked the guy which way I should run, and apparently the trail goes on more or less forever in either direction. But he vaguely pointed right, so right it was.

WHAT A FANTASTIC PLACE TO RUN!! I ran through charming Broad Ripple, over rivers, canals, past playgrounds. Most of it was shaded, it was almost perfectly flat, and the few road crossings were well marked. There were tons of runners, walkers, strollers, and bikers out using the trail. 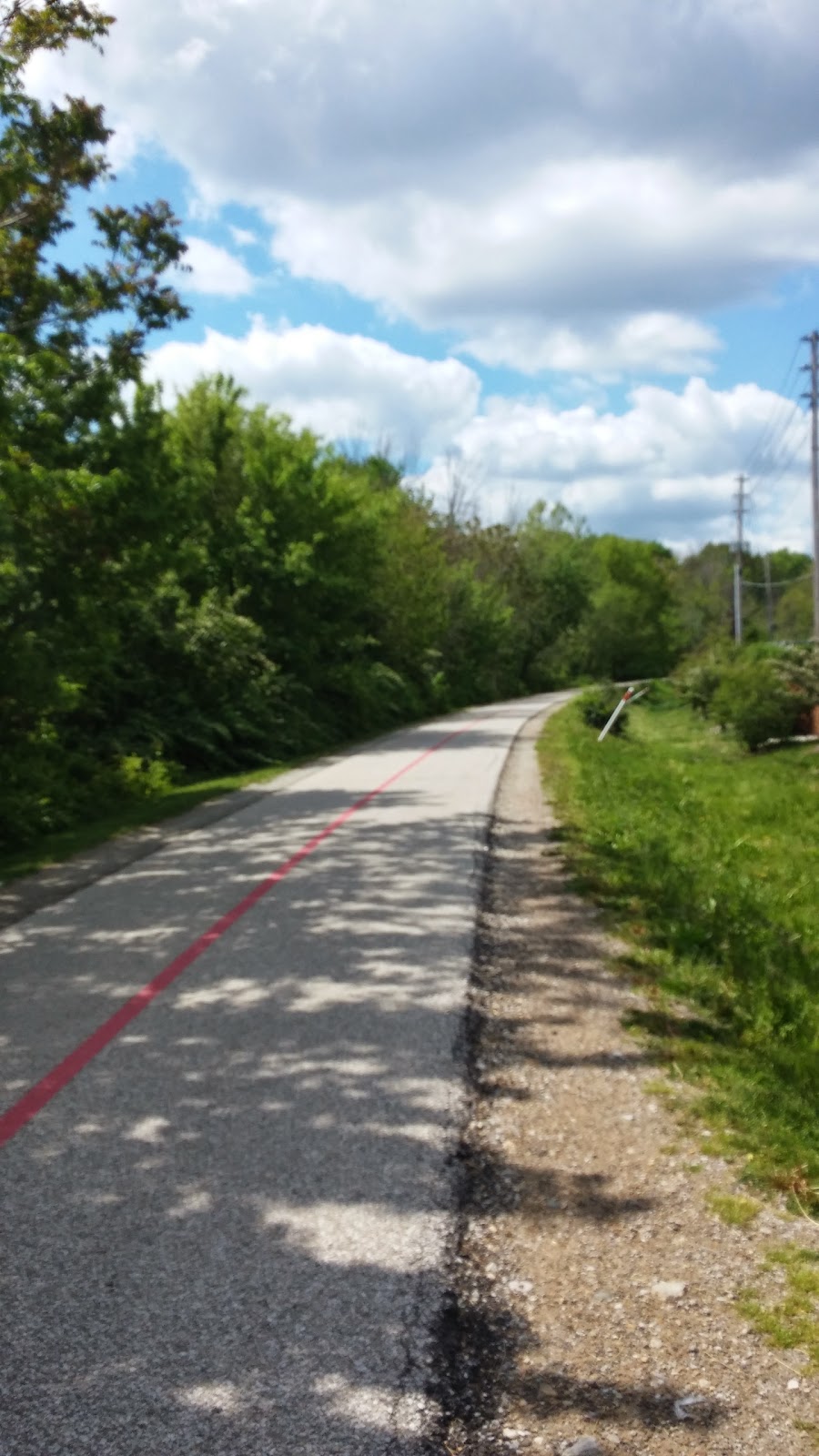 I turned around at 6.5 miles and hit 13 just as I returned to my school bus car. Just for fun, I tacked on an extra 0.1 to say I rounded out the half-marathon distance, and I did it in 1:59:04. It felt amazing to casually run a sub-2 half-marathon distance. Hell, it was delightful even. I'm not sure I've ever done that during a training run. Love, love, love.

Fortunately, I was parked in front of a grocery store, so I went in and picked up some chocolate milk and a few healthy snacks for the rest of my trip. But, something about having just stopped running, combined with the fluorescent lights of the store and being hungry left me mildly disoriented for a minute. I realized I was standing unnaturally close to people. And still sweating, natch. I pulled myself together, clearly drank the chocolate milk, and headed back to the hotel to get pulled together for the reception.

The reception was lovely. I got to hang out with Dr. Ears and her new husband (they were married in December, but waited for spring to have the picnic reception), and meet a bunch of their friends who I didn't previously know. They had all sorts of costume pieces so guests could take silly pictures.
But here's where I need some feedback. I spent a good chunk of time chatting with another guest who has spent years getting healthy, staying healthy, and getting strong. She's a strong advocate of the Adkins diet. I mentioned that I just.stay.hungry, all the time. This launched an hour-plus discussion about how I almost certainly do not eat remotely enough protein. I'm feeling a little unsure about making dietary changes, and would love some feedback. She recommended:
What do you guys think? Does this work for runners? Is it really possible to lose weight and not starve all the time? Do I really not eat enough protein? Please chime in!! I'd love to make some nutritional changes before marathon training gets into full swing next month.
Posted by Joanna at 7:30 AM

Not being a runner, I can't really comment on whether all that protein will help with the running/constant hunger thing. I do know, though, that when you are not running, you are thinking a LOT. Brains run on sugars, so I would be hesitant to cut way back on your carbohydrate intake. ODP needs frequent sugar breaks or he looses focus, so I would assume that you might experience the same if you go full Atkins. Maybe consult with a nutritionist before making any drastic changes to your diet to all of your needs into consideration?