I am back home after a wonderful weekend with Meg in North Carolina, where we ran the Raleigh City of Oaks Half-Marathon on Sunday. Welcome to the race recap!

On Friday afternoon I flew out of SLC and into Raleigh, where Meg was waiting to pick me up. We started things off right with custard (dinner of champions!) and some down time. Saturday was lovely and lazy, starting with brunch at The Irregardless with my friend LW, then packet pick-up, driving the course, doing some shopping, and carb loading at Biaggi's. We were so glad we drove the course. We'd thought the course was fairly flat, but realized right away that we had a lot of rolling hills in our near future. 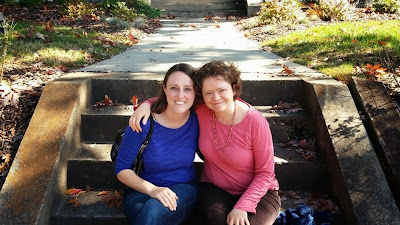 So happy I got to unexpectedly meet up with L!!

After dinner we organized all our gear for morning, then hung out for a while before turning in. A little after 5am I forced myself to eat part of a bagel, and we were out of her house just before 6. Parking was easy at Cameron Village. We sat in the warm car for a few minutes, not wanting to break into the cold morning. Finally, we forced ourselves to get out of the car and head toward the start line.

The start area wasn't crowded, but right away I was worried that it would be. The mile pace signs to help people pick a spot to line up at were very close together, and I was worried that it would be a super crowded start area. We'd also noticed on our drive-thru that an early part of the course was a fairly narrow street. Fortunately these concerns turned out to be unrealized, and crowding never was a real problem. The crowd filled in quickly as start time approached, and before we knew it we were off!

We settled in after 2 miles or so and the early miles ticked by. The foliage was gorgeous and the weather was perfect--not as cold as we were afraid it might be. However, those rolling hills were feeling less rolling and more like just plain hills. By mile 6, the hills were staying with me. I was more tired than I wanted to be. This is exactly the scenario where pace bands come in handy. It would have been easy to ease up here and there, assuming we'd recoup the time later. The pace band kept us on target and kept us moving.

By mile marker 11 I'm pretty sure Meg was rethinking her decision to take up running, and I was busy doing mental math about our pace and trying to distract myself from my decreasing energy. Why the mental math? I was confused about mile markers. I could hear other Garmins beeping about mile splits before my Garmin's beep, and yet, my Garmin chirped about mile marker 12 almost a quarter mile before we passed the physical sign. A quarter mile?? That's too much for Garmin error, especially when mine was chirping later than many on the course. I assumed the physical mile marker was mis-placed. The fifth marker had been way off (I was certain), so I assumed this was too. Fortunately, Meg knew the area pretty well, and figured out quickly that we the physical mile marker must have been closer to right.

I knew she was tired, but Meg dropped the hammer on pace in the last mile. She dropped it so far, and when I knew how tired she was, that only then did I realize that we were in trouble for hitting our goal time of 1:59:59. The Garmin/mile marker discrepancy had thrown us off. We covered our last full mile in 8:31, a full 40 seconds faster than my pace band recommended. With two and a half minutes left before breaking the 2 hour mark, we spotted the finish. Our last 0.3 miles was at a 7:30 pace. Down that straight away, I counted down the blocks, 3, 2, 1, until we crossed the finish.

Just a step or two over the finish line I reached over and stopped my Garmin: 1:59:37. We'd done it. Six plus years after our first race, we'd finally gone sub-2. 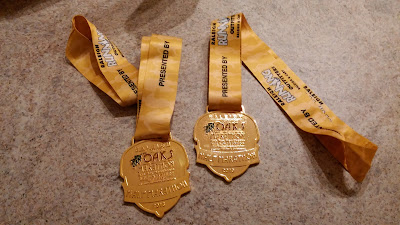 We got through the medals & pictures finishers' area and made our way toward the post-race party for long enough to grab some water. We strolled around Cameron Village to cool down before heading back to Meg's place to clean up and find some brunch. After brunch and some shopping, it was sadly time to pack up and start the long voyage home. 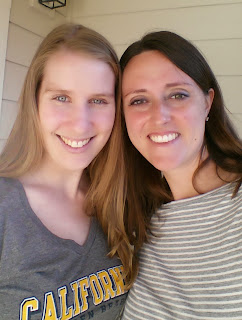 I enjoyed this weekend so, so much. I cannot tell you how much I appreciated a lazy Saturday and the chance to catch up with Meg. Beating that 2 hour race clock was only icing on the cake. As for the race itself, it was well organized (even the tech shirt is nice!) and held at the perfect time of year. It isn't a flat course though, and if you're game for some just-harsh-of-rolling hills, it's a really pretty course.

Thank you all for the words of encouragement last week!! I'm taking this week off from running and will hopefully get caught up on reading your race recaps from this past weekend!
Posted by Joanna at 11:09 PM

Woohoo! Way to rock your goal on a hillier-than-anticipated course!

Congratulations on a great race!