Mondays in Love: I've never seen that before!

On Saturday I did my old 4-mile route, slowly running as much of it as I could/felt comfortable doing. It was so insanely gorgeous out that I added an extra lap around the block just to have an excuse to stay outside a little longer. As I was rounding that extra block, a car stopped at an intersection and the guy yelled out his window, "Now there's something I've never seen before! I'd put it on Facebook, but I don't want to violate you!" LOL! I wasn't sure what the proper response was. Thank you? A wave? Ignore him? It felt like the hugely pregnant version of getting cat called on a run. 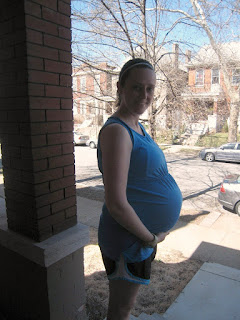 What? What's so crazy about this?? Haven't you
ever seen a woman running at 36 weeks pregnant? ;)

Even aside from that guy though, this run was the first where I felt like people were just staring at me. Sometimes pretty openly. Can I get a maternity running top that says "My OB signed off on this" or maybe "This is still safer than sitting on the couch"?? I really don't want to be shamed out of a slow run if it's still enjoyable. I loved the run!!

Just so no one freaks out on me here, I am being cautious! My mile times are much slower than they were even 4-6 weeks ago (splits ranged from 11:22 to 12:27 for the miles I ran/walked) and if it's uncomfortable, I walk immediately. I carry water with me even for 2.2 mile walks and I often carry my phone. Nothing crazy going on here. As evidence, I tried to run on Friday morning and it was just uncomfortable, so I went for a walk instead. Some days it works, some days it just doesn't. It just depends on how Baby Brother is positioned on any given day.

From here on out I'll have OB appointments every week. I'm officially full term on Tuesday but not due until April 3.* As of my 36 week appointment, I was 1.5 cm dilated, which apparently is normal for someone at 36 weeks who has had a baby previously.** We're doing the last things around the house this week--getting close!! Nursery pics coming soon!!

* Just in case anyone is curious about all these weeks and how it works, here's a quick primer. A woman is considered 2 weeks pregnant at conception because weeks are counted starting at the beginning of the last period. So, while I say I'm 36 weeks pregnant, that means I've actually been with child for 34 (almost 35). A "normal" pregnancy ends at 40 weeks (actually pregnant for 38 weeks). A baby born before 37 weeks (35 weeks pregnant) is considered "pre-term" and a baby born after that is considered "full term." I think 42 or 43 weeks is considered post-term, but good luck getting a doctor to let you go that long without being induced.
** Anything medically related here is specific to me and my pregnancy. Do not rely on me for medical advice!
Posted by Joanna at 9:00 AM

I get a little chuckle out of the fact that you need to put a medical disclaimer on your blog. :) You look great. We are very excited to meet baby brother ganning!
I think you should have yelled back to the guy that there was no need for him to put it on Facebook because you already were taking care of that!

Love that you're justifying this. Lol. If I saw someone 36 week pregnant running, it would do nothing but inspire me! That's seriously awesome!! GO YOU!!!

I think you need a shirt that says something to the effect of: So what's your excuse again for sitting on the couch? I'm 36 weeks pregnant!

Keep it up girl! And good luck in the upcoming delivery!

I love that you are still running, I quit about 14 weeks along both times because I couldn't stand how weird it felt. I say keep running, I think you are being smart about it and shouldn't have to justify yourself.

You are awesome, Jo! Seriously, you are a running and maternal inspiration :-)

I always wondered how those pregnancy weeks work. Man, that is confusing!

Too funny being "cat called". So bizarre.

Good for you being out there. Seriously, I am in AWE! And you look wonderful.

Eek I can't believe it's almost time to meet the new little man!!!

Too funny that about that guy, I don't know how I would've reacted either!

You look so cute! I can't believe it's almost time!

I have never seen a woman running at 36 weeks pregnant. You are the first, congrats!!!!!!!!!
You are doing something of wonderful that I didn't believe possible.