I just beat my 2009 total mileage. Today. September 4. With nearly a third of the year to go. YEA, that just happened!
In 2009 I ran 463.3 miles total. Today I ran 18.1 miles, bringing my 2010 total to 481.5. Woo!!
To say I was apprehensive about today would be an understatement. My 16-miler last weekend was pretty awful, so I'd talked with Coach Paula in the middle of the week about how to handle the rest of the training cycle. I thought I should repeat the 16-miler and peak at 18 miles. She convinced me to just go for it--do the 18 and 20 milers then start tapering. She felt confident that my difficulties last weekend were more about the weather than about my fitness.
It looks like she was right. Today it was about 15 degrees cooler than last weekend, and it helped SO much. I was also running the neighborhoods/parks near my house, so I was on more familiar ground. I did three loops, each beginning & ending at my house so I could hydrate/Gu. The first went through a neighborhood a lot like mine, then through the park. The second went through our own little Beverly Hills then the park. The third loop, I went over to the Brewery (and didn't even get lost this time!) and back, with another pass through our mini-Beverly Hills. The third loop was the best, which I'm taking as a good sign that I was ready for the distance.
And the day wasn't over yet. Next up, family trip to the zoo. Featuring my favorite quote of the day, from the babe, "bye-bye elephants!" 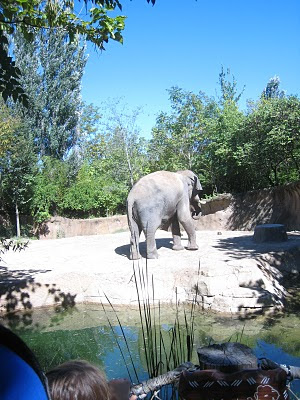 So glad your run went so well! I'm planning to do my 8 in the morning. This cooler weather makes ALL the difference. My roomie was at the zoo in STL today too. Hope you guys had a fantastic day.

and WAY TO GO on kicking last year's mileage in the REAR!!

Congrats on beating your mileage from last year!

Those coaches are soooo smart! ha

Hi Joanna -
First of all - WOW! Congrats on beating your 2009 mileage so soon! That's awesome!
Secondly - thanks bunches for playing along at the Lucky Girl Crafts monthly blog party. Oh - and be sure to check back because I think there's something there for you, too.
:D
Have a great holiday weekend-
#1 Lucky Girl, Jessica